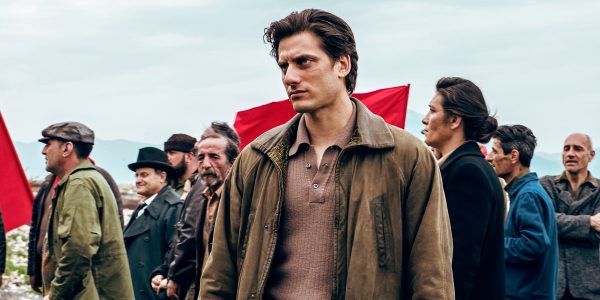 Based on the 1909 novel by Jack London, Pietro Marcello crafts a sweepingly timeless romantic epic that follows the fortunes of a sailor (Luca Marinelli) in his captivating quest to become a writer.

Martin Eden is a hero in the classic Southern Italian style: his passionate raw charisma hides a vulnerable but trusting heart.
Marcello’s film is set in a nameless Italian port city where it blends a variety of temporal cues while remaining timeless, a restless momentum driving the narrative forward, and keeping the audience absorbed for nearly three hours.

As Eden, Luca Marinelli has an energetic physicality that pulsates with his desire to overcome the odds of his skimpy education. We first meet him as a jobbing sailer, his imagination fired into action by a chance encounter with the sophisticated Elena (a fragile Jessica Cressy) and he becomes infatuated, for a while. But Martin’s intense preoccupation with bettering himself work-wise – and socially too –  soon becomes an obsession, alienating those who have helped him, As the saying goes: ‘you can take a boy out of Southern Italy but you can’t take Southern Italy out of a boy” and his humble start in life tugs at his conscience.

Marcello’s decision to shoot on Super 16mm gives the film an atmospheric retro quality that compliments the timeless romance of this aspirational story. The use of archival footage both illuminates and intensifies this haunting flight of human passion. The desire to seek a better life against all odds is both timely and universal. MT