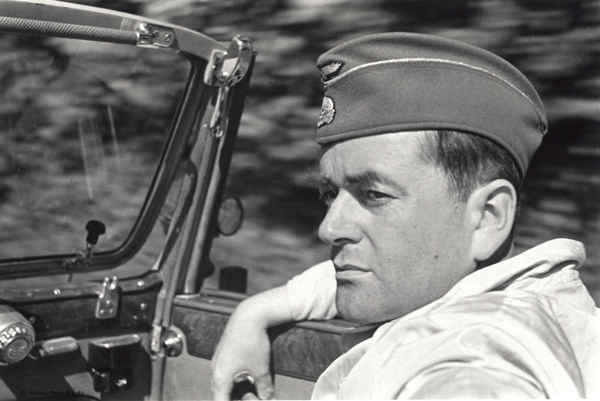 Vanessa Lapa follows her expose on the life of Heinrich Himmler The Decent One with another illuminating Nazi portrait, this time of ‘Hitler’s architect’, ally and facilitator Albert Speer.

The Israeli filmmaker’s project came into existence via a chance meeting in a hotel which, on further examination, uncovered an eye-watering treasure trove of archive news footage, audio sources and photographs most of which have never seen the light of day until the present day.

In Lapa’s film Albert Speer (1905-1981) comes across as a cultured but rather narcissistic character who enjoyed a glamorous and comfortable existence as the Third Reich’s Minister of Armaments and War Production in the final years of the Second World War (1942-45). Hitler had wanted to be an architect himself but hadn’t the talents that Speer clearly possessed, so he used the charming and debonair designer as a conduit for his own ideas in constructing the built environment of his Nazi regime. Speer’s subtle charisma saw him through the Nuremberg Trials, convicted but bizarrely escaping the death sentence, this high-ranking official is pictured on the steps of the prison, after serving a two decade sentence, without a shred of remorse but with the victorious words: “See, I’m still good-looking after 20 years”.

During his confinement Speer re-imagined his life and re-wrote his own story claiming not to have been responsible for the overseeing of the gas chambers that led to Third Reich’s worst horrors. He also penned his 1970 best-selling memoir ‘Inside The Third Reich’ which captured the imagination of Hollywood. But on later scrutiny his self-whitewashed story emerged as ‘fake news’, according to the indomitable Lapa who sets out to debunk his version of events in this sleek, compelling and utterly fascinating film.

And not before time. Speer’s specious story is clearly ripe for re-examination. This suave and sinister man still remains unchallenged nearly forty years after his death. Lapa choses a buzzy and effective narrative device to showcase her study: Speer’s 1971 meetings with Jane Birkin’s brother, the scriptwriter Andrew Birkin (apparently a protégé of Stanley Kubrick) who was selected by Paramount to scope out the narrative for a putative film which was later abandoned, largely due to British director Carol Reed’s dubiety. Their informal discussions add subtle but sensational context to the photos and archives, as do the ‘fireside chats’ with Reed who offers his own critique on Speer’s version of the events as the two British film pros plough through 40 hours of Birkin’s recordings with the Nazi, in preparation for his script.

Reed is clearly sceptical, pouring scorn on Speer’s glib technique of painting himself as another ‘decent one’ despite his nefarious Nazi activities that led to the deaths of millions, not to mention the slave labour of the concentration camp victims who were used and abused in Hitler’s efforts to rebuild Berlin. On an equally sinister note, it also emerges that many of these high-ranking officials slipped off the radar and were re-deployed in other parts of the world where their specialist knowledge gleaned in the field of forced euthanasia (Aktion T4) became invaluable.

The film flips between the mind-boggling discussions between Birkin, Speer and Reed; the extraordinary recordings inside the courtrooms of the Nuremberg Trials; the archive footage on parade with the Nazis featuring Hitler and his henchmen, not to mention Albert Speer at leisure with his wife Margarete Weber in their soigné country villa. MT