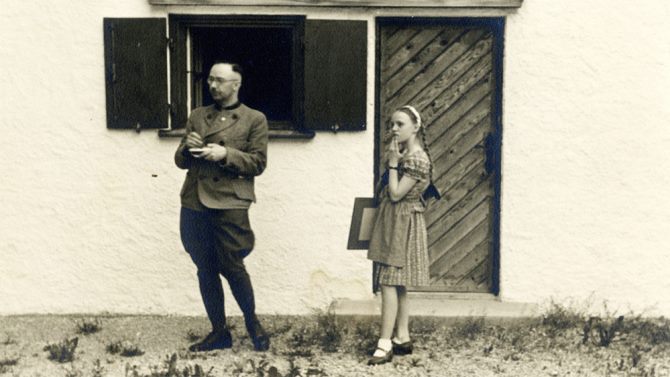 At the Eichmann trial in Jerusalem, the German born philosopher Hannah Arendt coined the phrase “banality of evil” to describe the defendant. The subject of Vanessa Lapa’s documentary THE DECENT ONE is Heinrich Himmler, Reichsführer SS and Eichmann’s direct superior, who fits the Arendt description even more aptly.

The film’s narrative is based on Himmler’s extensive diaries, photos and documents, which were found by soldiers of the US Army in Himmler’s house in Gmund, Bavaria in May 1945. In spite of orders, the soldiers never handed over the documents to the authorities. In 1960, the entire collection was owned by Chaim Rosenthal, who stored them under his bed in Tel-Aviv. The way he came into possession is worth another documentary film but the only clue given by Rosenthal is that he first discovered some of the documents at a neo-Nazi convention in Dallas, Texas, where they were offered by a man driving a car with Mexican number plates. Vanessa Lapa purchased the archive from Rosenthal (who died in 2012) after the news of its existence came to light in 2006.

Heinrich Luitpold Himmler was born in Munich in 1900. His father, a Catholic, was a senior teacher and his godfather was Prince Heinrich of Bavaria. Himmler enjoyed poor health as a child, missing school mainly because of a weak stomach, which would trouble him for the rest of his life. As a teenager, he was caught between the desire to participate in glorious active service during the War (he missed action in WWI), and depressing thoughts due to low self-esteem. At the Technical University of Munich he studied Agronomy, gaining an MA. He joined the Nazi party in 1923 and the SS in 1925. He was involved in Hitler’s “Beer Hall Putsch” and whilst Hitler served a prison sentence, Himmler helped Röhm, the leader of the powerful SA, to recruit members for both party and storm troopers. When Himmler joined the SS its main function was to guarantee the security of Hitler and the organisation of public meetings. Its membership was 290 in 1925, whilst the SA membership would rise to over three million. But in 1934, Hitler had Röhm shot because he feared the might of the SA, who wanted a “second revolution”. The SA lost all its power, and was not much more than a training academy. By contrast, the SS flourished under Himmler, achieving a membership of over a quarter million by 1929. After 1933 Himmler would control the whole of the German police, including the Gestapo and became the leading architect of “the Final Solution”. He was undoubtedly Hitler’s number two – called “boring and pedantic” by Hitler’s inner circle, he nevertheless accumulated much more power than any of his detractors.

THE DECENT ONE is told from the viewpoint of Himmler and his family; the affectionate letters between his wife Marga and daughter Gudrun, accompanied by archive films, newsreels and photos corresponding to the dates of the letters, but concealing the real, often sinister, nature of his activities under the regime. Heinrich met his wife Margarete Boden, a nurse who owned a share in a small private hospital in the 1930s. They had a daughter, Gudrun, whom Himmler called “Püppi” (“Dolly”), born in 1940 and later adopted a son. Himmler and his daughter were close, even though he was often away from home. The parents seemed to have indoctrinated her successfully: after Hitler’s coming to power in 1933, Margarete wrote to Himmler that Gudrun “had asked, if Uncle Hitler would have to die too”. After Margarete had agreed with Gudrun that Hitler would live at least 200 (sic!) years, the child went to sleep peacefully. When Gudrun visited Dachau concentration camp with her mother and family, the first one of its kind, planned and executed by her father, her report is that of a brilliant day-out. She talks about the good food and the presents they were given.

Gudrun would later marry the right-wing journalist Burwitz and became engaged in the “Stille Hilfe” in post-war West Germany, an organisation, which helped “persecuted” Nazis, like Klaus Barbie. She was called the “flamboyant Nazi Princess” and hid the chief of Theresienstadt Ghetto security service, Anton Malloth, in her home near Munich between 1988 and 2001, when he was sentenced to life imprisonment.

Whilst Himmler usually tried to please his family, Margarete complained in a letter to her sister in the early 40s that her husband had visited the area of their home but had not come to see his family. The reason being that Himmler stayed with his young secretary, Hewdwig Bodhof (his mistress since 1938) with whom he had two children. Margarete was seven years older than Himmler and could not have any more children. The only reason given by Himmler for this relationship with Hedwig, was his own decree, stating that German parents should have at least four children.

Himmler’s deputy, Reinhard Heydrich (assassinated in Prague in 1942) knew Himmler better than anybody else and once told a friend “look at Himmler’s head. The upper half is the teacher, the lower half is the sadist”. Heydrich had chaired the “Wannsee Conference” to start the “Final Solution” and was honored by Himmler in a special way: the transport of the Jews to the death camps were called “Action Reinhard”. Apart from the six million Jews murdered, Himmler’s SS was responsible (with the active help of the Wehrmacht) for the murder of another five to eight million civilians, mainly in Poland and the Soviet Union. But when Himmler finally realised his dream of war leader, as commandant of the Upper Rhine Army and the Vistula Army, he failed miserably in 1944, and had to be replaced by an angry Hitler. In one of his last letters to his family, this “Schreibtisch Mörder” (Desk-murderer) who never laid a hand on anyone, proudly foretells “even in a thousand years’ time, everyone will say that all German soldiers, generals and SS men have behaved with decency”.

THE DECENT ONE is the most important documentary after SHOAH about the subject of Nazi criminals. It relies purely on documents, written, filmed and expertly edited, telling the story of a man who choose to be a mass murderer, not so much because of anger, but because he wanted to create a perfect world were humans where either ‘heroic and Nordic’ or ‘Sub-human’ and worse than animals – and had therefore to be exterminated. He was the architect of their demise, but he remained an ordinary man: not decent, as he hoped, but not much different from many of us – just in the right place at the right time, he managed to realise his dream of a perfect farm where only perfect specimens were allowed to survive. He committed suicide as a prisoner of the British Forces on 23.5.1945, forty-four years old. AS