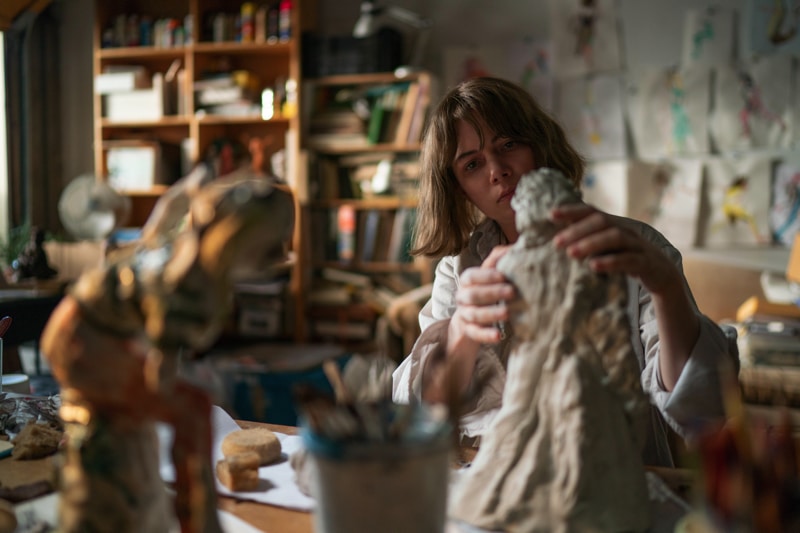 Kelly Reichardt’s lowkey but thematically rich tale of creative life in the West Coast town of Portland Oregon is a quietly amusing rumination on contemporary counterculture and a tribute to the famous art college there.

More zen like and offbeat than Certain Women, it follows along similar lines in depicting the everyday uneventfulness of a generation busy doing very little to change the world but making a big deal about it in the process.

Michelle Williams is Lizzy a sculptress and ‘artist in residence’ who pours her heart into her misshapen clay figures but shows no compassion for a bird mauled by her assertive pet cat Ricky. Throwing into her garden with a callous: ‘go and die somewhere else’ the animal then makes a speedy recovery under the care of her fellow artist and landlady Jo (Hong Chau). Both are stressed out preparing for their various shows in this chilled out rural backwater that makes a setting for Reichardt to expose their petty foibles and trivial existence and she does so without judgement or cynicism in a film which is truly delightful in its lowkey languorousness.

There is a veiled animosity and irritation between these women that Reichardt handles so gracefully as to be almost imperceptible and the same goes for Lizzie’s relationship with her chipper father Bill (Judd Hirsch) and his freeloading houseguests (Amanda Plummer and Matt Malloy) who have overstayed their welcome but serve to fill the void in Bill’s life since he and Lizzy’s mother Jean (Maryann Plunkett) who runs the art school, are separated. The same goes for her troubled brother Sean (John Magaro), whose main concern is losing a TV channel. Reichardt totally avoids cliche  in this tender almost wistful study of family interactions, friendship and the human need to make our mark in a world where almost everything has discovered or been done before and survival is guaranteed. MY