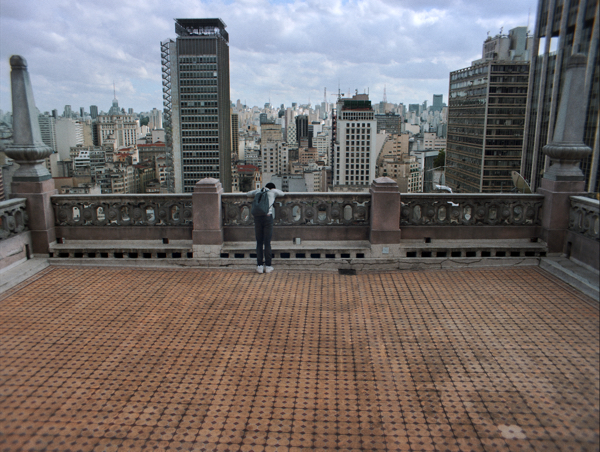 Brazilian director and co-writer Matias Mariani has had a distinguished career as a documentary maker and this feature very much reflects the form: particularly in the long panning shots of his hometown of Sao Paolo that give us a strong sense of what is it like to live there. There are echoes of Joao Pedro Rodrigues’ memorable The Last Time I Saw Macao and both features have a magistrate’s realist qualities. DoP Leo Bittencourt had to convince Mariani to chose an old-fashioned 4:3 ration, but is has certainly paid off: The towering buildings dwarf the protagonists, and the subjectivity of Amadi’s ambivalent feelings are well-served by this format.

Musician Amadi (Oc Ukeje) has arrived in Sao Paolo from the Nigerian capital Lagos in search of  his older brother Ikenna (Iwuji), who has got “lost in transition”. Amadi’s motives are purely self-serving: if he doesn’t find Ikenna the mantle of the eldest son and the responsibility for the entire family will fall on his shoulders; and his own freewheeling lifestyle will be over. His uncle Andre is also keen to track down the “lost son”. But it soon emerges that Ikenna is not the famous mathematician he claims to be – and the institute where he was supposedly working doesn’t even exist. Amadi follows the steps of his brother, seemingly always arriving too late on the scene. It also comes to light that Ikenna was working on a way to transform Brazil over-night into a wealthy country, ending poverty for good, but losing him a great deal of money in the process. . He eventually meets up with his brother’s ex-lover Emilia (Nascimento), and she eventually provides the key to tracking down his enigmatic sibling.

Working of several levels, Shine Your Eyes is about settling family scores but also wider ranging themes of displacement and cultural identity. Amadi feels a need to turn the tables on his favoured old brother but he also lacks the confidence to struggle on alone in this endeavour. There are long, languid sequences that see Amadi walking the streets, his inner dialogue audible. Mariani has succeeded in showing how much the lure of the “other” is equally strong in both siblings. But the focus is always Amadi and his journey of self discovery amid a disconcerting landscape that echoes his own inner turmoil. AS