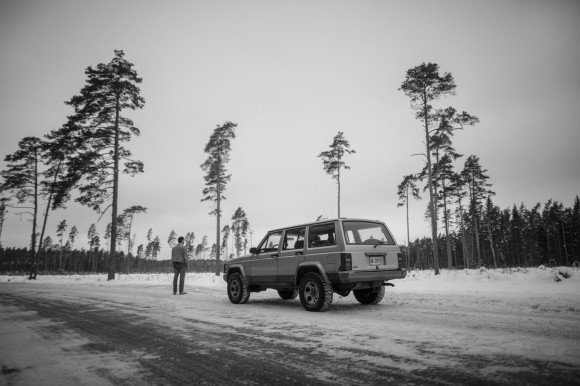 Martti Helde was feted for In the Crosswind his experimental wartime feature debut back in 2014. This stylishly frosty foray into family territory is more intimate in focus despite its striking widescreen visuals and tells the story of siblings struck dumb by violent circumstances.

Essentially a two-hander that plays out in three parts, Scandinavian Silence muses over themes of false memory and subjective interpretation in an enigmatic film that is ultimately more visually arresting than entirely satisfying in its storytelling, leaving us with more questions than answers. But it certainly captivates and conjures up a Tarkovskian sense of resonance through expert camerawork from Sten-Johan Lill and Erik Pllumaa creating an arresting sense of place.

In a freezing forest landscape Tom (Reimo Sagor) joins his sister Jenna (Rea Lest) in a drive that is a one-sided monologue, Tom expressing his feelings of regret, confusion and self-doubt about a troubling family set-to that left him in prison and his sister Jenna exposed to their father’s abuse. Then back at the same starting point, Jenna gives her sides of the story while Tom keeps his powder dry at a table in a roadside cafe. And what emerges is a different take on the situation, Jenna partially exonerating Tom for his acute feelings of guilt. This diatribe is punctuated by a strange encounter with an older couple adding an unsettling vibe to the proceedings that resonates with their dysfunctional homelife.

The third section of the trilogy is like a silent film of what has gone before, neither Tom nor Jenna speaking, it relies entirely on body language, suggestive expressions and eye contact culminating in a surprising finale that somehow leaves us wanting given the weight of expectancy with what has gone before.

Style over substance this may be but Helde certainly creates an arresting piece of cinema that offers much food for thought in the frozen wastelands of the mind, where less can often mean more. MT