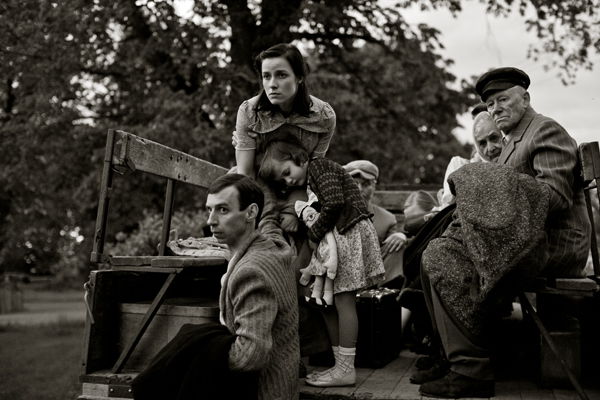 With invasion from Nazi Germany imminent, Stalin’s plans to ethnically cleanse the USSR of its Estonian, Latvian and Lithuanian territories were first carried out in June 1941—and resumed between 1945 and 1949. It was the beginning of a mass deportation and genocide of men, women and children from these countries to the unthinkable climes and working conditions of Siberian labour camps in the north.

Dedicated to the 590,000 people whose lives were claimed by the Soviet holocaust from these regions alone (total estimations throughout all the USSR are between 1 and 1.5 million), IN THE CROSSWIND is Estonian writer-director Martti Helde’s visually stunning, cumulative suckerpunch of a debut feature, and screened in the 30th Warsaw Film Festival’s International Competition following its world-premiere in Toronto, and was awarded a prize by the Ecumenical Jury.

That Helde is still in his 20s is remarkable. Based on a mix of eyewitness accounts, photographs, memoirs and survivor-testimonies, IN THE CROSSWIND is a distinct contribution to a cinematic genre that must tread the delicate line between aestheticising and honouring a historical tragedy. Working with cinematographer Erik Pollumaa, the graduate of Tallinn’s Baltic Film & Media School conceptualises these catastrophically underreported-on episodes in Soviet history with a series of wonderfully choreographed tableau vivant (‘living picture’) compositions.

Said compositions are doubly posed: actors are arranged as if caught by a stills camera, trembling with contained energy. Pollumaa’s Steadicam moves with Tarr-like elegance through these scenes like a helpless onlooker to a visual snapshot that in the same instant invites participation but denies understanding. This moving elegy to resilience and hardship is fully aware of the cinema’s limitations in dramatising genocide.

Scenes depicted include those of anguished separation, as women and children are wrenched away from husbands and fathers; those of impoverishment and deterioration as women, underfed and humiliated, are put to work on collective farms; an arrest takes place, of a starving woman who dares to reach for a loaf of bread; men are placed before a firing squad and executed without trial; later, news of Stalin’s 1953 death comes resonating through on the radio. A vivid sound design animates these temporally paralysed traumas, while Pärt Uusberg’s riskily frequent musical score lends an unapologetically emotive swell whose impact is perhaps magnified by current developments in Crimea.

Chief among Helde’s sources of inspiration are the letters sent from one Estonian woman deported with her daughter to Siberia. Erma Tamm (Laura Peterson), a philosophy student, wrote without reply to her husband Heldur (Tarmo Song), who we learn was executed five months after his own deportation. Narrated and interweaved with other texts, Tamm’s diaristic dispatches heighten the frozen present-tense of her purgatorial trajectory. “The loveliest years of my life,” she notes, “passed at a standstill.” With knowing heartache, she laments not having fled Estonia before deportations began—instead living her life “held to ransom”.

The persistence of these scenes is brilliant. The fine line between a moving image and a still one, between life and death, is captured in the slight quiver of an actor’s sustained pose. Helde, keeping them in suspension as if filming a game of Musical Statues, reminds us that these are ongoing re-enactments that exist in time as much as space, by affording his actors the occasional involuntary blink, or allowing the odd drip of water from a creaky roof. The traumas of the Soviet holocaust persist. MICHAEL PATTISON