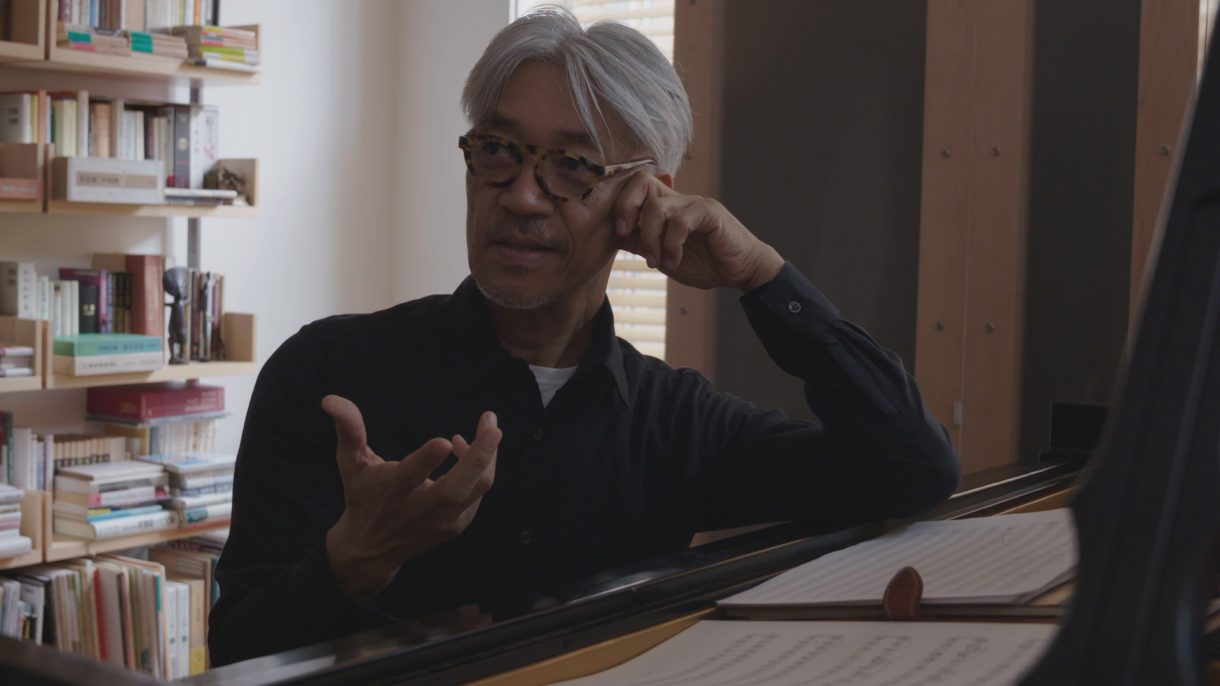 Five years in the making, Stephen Nomura’s discreet yet impressively resonant portrait Ryuichi Sakamoto: Coda brings us face to face with the Oscar-winning Japanese composer of synth-pop and electronica at a time where he was being treated for cancer and was writing Async his first album in eight years.

The documentary follows Sakamoto as he survives this near death experience and we first meet him in his homeland tinkling the ivories of a Yamaha baby grand piano that has also lived through trauma in the shape of the 2011 tsunami. Showing his deep humanity and social engagement as an artist, Sakamoto rocks a protective jacket as he boldly explores the restricted contamination zone of the Fukishima nuclear disaster demonstrating his allegiance to those who have suffered by joining a protest at the Japanese prime minister’s Tokyo residence. In further honour of these tragedies he later performs with elegant finesse the theme tune from Nagisa Oshima’s Merry Christmas, Mr Lawrence dedicating this soigné arrangement to the victims. To say Sakamoto is a poster boy for such calamities as the 9/11 attacks, Iraq war and climate change would be trite and kack-handed but these concerns have certainly inspired his work for a quarter of a century and his calm demeanour and contemplative nature do seem apposite qualities in a creative genius who, at 65, has certainly lived through troubled times. With his mop of silver hair and striking gracefulness he is an appealing performer who is at pains to dress stylishly and eat healthily, attributes that compliment his work, and his candidness in talking about his creative process marks him out as a man of integrity and great intelligence.

Nomura Schible keeps his film sleek and yet reasonably loose in structure without resorting to talking heads or periphera – this is a snapshot of a point in time. There are also excerpts from Sakamoto’s Oscar-winning work on film scores for Bernardo Bertolucci’s The Last Emperor and The Sheltering Sky; together with Alejandro G. Inarritu’s The Revenant, and archive footage of the master conducting the relevant film pieces. These dovetail into scenes in his domestic milieu where he is pictured composing on the computer and playing his piano, a Steinway (naturellement). MT