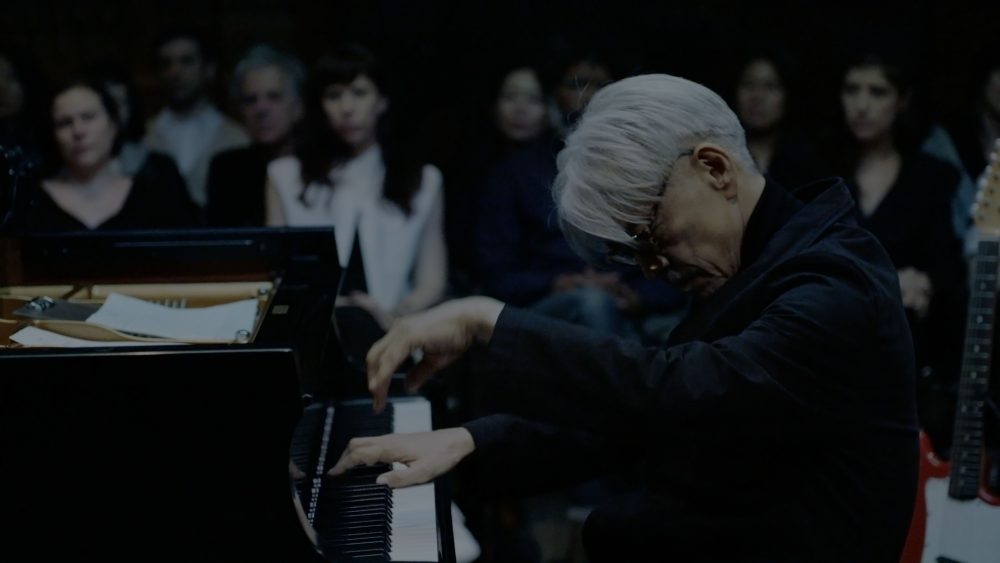 In April 2017 Japanese composer, pianist and music producer Ryūichi Sakamoto made a guest appearance for two evenings in the Veteran’s Room, an small 200-seater hall at the Park Avenue Armory in New York. Experienced music documentarian Stephen Nomura Schible, filmed this the intimate gathering, the first for eight years since the Sakamoto’s recovery from cancer. Async is not just a musical experience but also a visual one: a huge screen under ceiling of the auditorium fills up with images and videos.

After his first solo album in 1978, Sakamoto’s career concentrated on a fusion of synth pop, techno and house genres. But he also branched out into film music, winning an Oscar for co-writing the score for Bertolucci’s The Last Emperor, followed by more recent work for Brian de Palma and Pedro Almodavar. So it comes as no surprise that async is very much influenced by visuals and images. “This album is probably the one most influenced by moving images. Movies always inspire me. So when I am feeling empty I start watching a movie. Kung Fu films are so inspiring, so wild”. Unlike the music of the 18th century, which is very much rigid in its formal design, Sakomoto wants to make music as a spontaneous invention. “My desire was the only rule”. The music – with various instruments, western, Japanese and even a sheet of glass – creates a soundtrack for an imaginary film by Andrei Tarkovsky. The composer admits that he is very jealous of his music heard by an audience, “I did not want anyone to hear it”. The 5.1 surround channel underscores the cinematographic experience, one experiences music and images as if present.

If you’ve never heard music by Sakamoto, let your mind wander, and you will soon find your head was filled with associations from the images/music –nothing spectacular or specific, just a pleasant sliding into wellbeing. Even as a great fan of Baroque music, with its very clear formal limits, it never occurred to me that I would feel any asynchrony in the performance – it simply invites the viewer to wander away and dream. AS