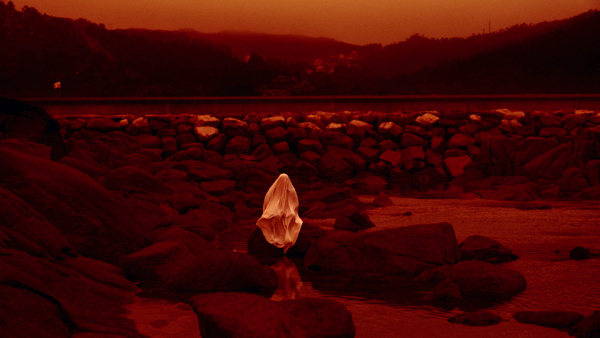 Lois Patino made his name at Locarno 2013 with a documentary exploration of the Galician fishing industry Costa da Morte,

This slow-burn sophomore feature returns again to Galicia, and another community in crisis in the coastal villages of Lemos and Camarinas where Patino crafts a creepy folkloric fantasy thriller with an evocative sense of this wild and storm-lashed coast. Here a giant sea monster is threatening the locals when the Moon rises. Patino makes use of inter-titles to drive the story forward, his protagonists’ thoughts intermingle and are narrated by a voice over. The focus is the disappearance of a local fisherman called Rubio who has been tasked with bringing lifeless corpses back to shore, allowing families to mourn their dead. But when Rubio suddenly vanishes, the villagers fear the worst and talk of a curse and a mysterious appearance of the new outcrop of rocks out to sea.

Rubio’s mother ((Marra) is known for her supernatural powers and resorts to witchcraft and the use of mirrors to communicate with her son who eventually answers her: “Mother, I am sorry. I am going to take you out there. I will find the monster”.

Less easy to engage with than his first film, this is stunning to look at, with its foreboding seascape fringed by dark woods: “The colour of the water is dead fish. Only the beast can live there”. Soon more and more dead fish are washed up on the shore. The locals seem frozen in time, their energy sapped by the sheer maritime power which assumes a dominant force in their lives “the tide took blood from our bodies”. Women, covered in white sheets wander around the village at night with their livestock. The cathedral becomes a meeting place.

Meanwhile the menfolk are reduced to a state of catatonia. After the first hour, these black-and-white images are drenched with blood-red. When the dam overflows, this godforsaken place seems finally doomed.

This is an eerie fantasy, Alberto Posedas’ score making it even more sinister. Patino’s film unites with the global narrative of communities struggling and mostly failing to survive. It appears this village has lost its fight, and ghosts now hold sway, the past taking over the present with an uncertain future. Red Moon Tide is certainly a visual feast, and although the weird events are sometimes too enigmatic, the filmmaker has developed an inner logic for the narrative. AS