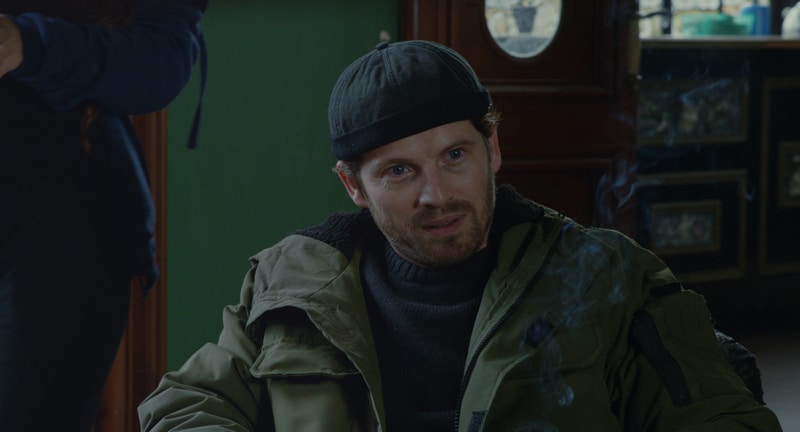 Rascal is a an everyday story of a psychopath played with hard-eyed nonchalance by Pierre Delardonchamps.

There’s nothing sensationalist about the story of Dje. The title might suggest a cheeky playfulness but this couldn’t be far from the truth. Not without charm when he wants something, Dje he can also being quietly menacing as he goes with the flow living by his wits, casually violent if he needs to be. In fact, ‘casual’ sums up a man who never gets worked up about anything. This homeless opportunist is none too shabby in his stylish anorak. A recidivist bottom-feeder who gets by on the streets of Limoges, where we first meet him on a train, rudely intruding on the privacy of his neighbour in a train carriage. But that’s the most harmless trait in his repertoire of antisocial behaviour.

Peter Dourountzis’ first feature takes a detached view of his psychopathic protagonist seen through the steely lens of DoP Jean-Marc Fabre. Limoges is seen as a joyless urban centre where danger lurks at every turn as Dje slips unnoticed in the crowd until he spots an unsuspecting female glance and returns it with a smirking stare. What follows could be a seduction or something more deadly but it mostly occurs off camera, and some women can be extraordinarily accommodating to this enigmatic stranger who is never there when the going gets tough. Of no fixed abode he has no identity papers. Meanwhile, street signs in bus shelters warn women to be vigilant. There’s a killer on the loose. But why would anyone suspect Dje with his boyish looks and clean complexion?.

Rascal was originally made as a short film, Dourountzis cutting himself plenty of slack with the textured script that plays to our fertile imagination and works in a subplot about Dje connecting with an underground network of homeless misfits who offer him room in their squat. Here he meets Maya (Ophelie Bau Mektoub, My Love) and the two have a thing for a while until Dje loses control and needs to move out of the spotlight and back into the shadows. MT