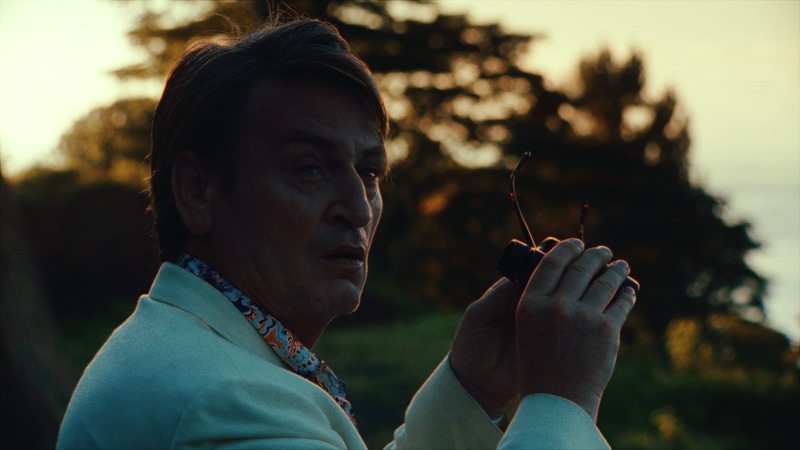 Catalan auteur Albert Serra follows Liberte his voyeuristic foray into 18th century Berlin with a kitschy French language feature – a metaphor for modern politics – in the Polynesian Island of Tahiti where the tropical climate and sultry sun-drenched sunsets are a hedonistic hideaway for a shadowy expat community headed by Benoit Magimel’s top ranking French fonctionaire De Roller, a soi-disant ‘representative of the state’. But behind this patina of charm seethes a cynic of savage mistrust.

The prowling voyeurs are back again looming out of this palm-fringed neon twilight zone of cocktail bars and nightclubs, only this time it’s the 21st century. Serra’s regular actor Marc Susini as a light-footed admiral of the submarine, and Sergi Lopez as a sleazy club owner Morton. Montse Triola’s role as a published writer returning home doesn’t quite work as the token female. But there are go-go girls and boys a plenty and the sexually ambivalent De Roller seems enamoured with their trans lead dancer Shannah (Mahagafanau). And we gradually relax into this mellow milieu inhabiting the intoxicating torpor of the tropical tale and its weird protagonists.

Serra is not a man to be hurried and once again he takes time to flesh out his antihero Romane De Roller: a bloated, besuited, supercilious, self-seeking bureaucrat who talks in repetitive platitude-strewn cliches, often finishing his sentences with a token “voila”. And Magimel is majestic in the role. Endless languorous days see him driven round the windswept island in a white Mercedes, visiting local mayors and claiming to have uncovered a rumour about the government starting nuclear testing again after twenty years, in a submarine located off the coast: You would not trust him to post a letter, let alone quell a conspiracy theory. But storm clouds soon threaten De Roller’s last days in paradise when a Portuguese diplomat turns up (Alexandre Melo) complaining to have been robbed of his papers. Is he a spy or a nuclear specialist? His appearance only adds to the sinister atmosphere of impending doom.

The most impressive scene takes place on the high waves during a surfing competition where a rip tide gives way to stratospheric ocean rollers. De Roller dices with death on the back of a jetski smugly declaring his mastership of land and sea: “I do what you do but in politics”. Serra’s bizarre style may not suit everyone but he is undoubtedly one of the most avantgarde and distinctive filmmakers of today. MT