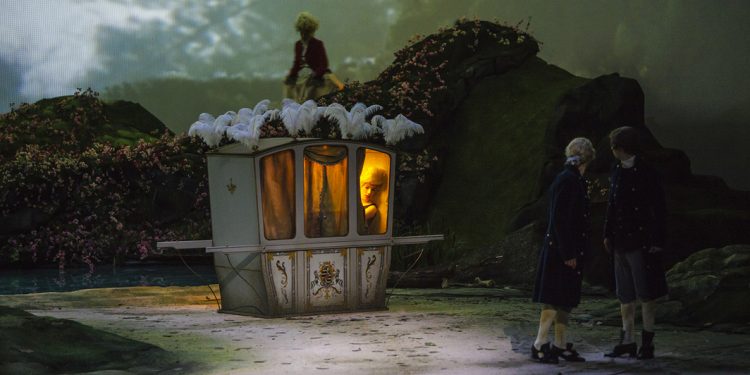 Catalan auteur Albert Serra was born in 1975 in Girona and is known for his delicately drawn and exquisitely mounted historical dramas such as La Mort de Louis XIV (2016); Honour of the Knights (Quixotic) 2006; and Story of My Death (2013). And there’s a great deal of mounting in his latest feature which stars veteran arthouse star Helmut Berger and competes in last year’s Un Certain Regard sidebar at Cannes Film Festival.

The theme in Liberté  is essentially voyeurism. If you should find yourself in Hampstead Heath on a balmy afternoon you will notice male figures darting surrepticiousy in the shady vegetation. You may even chance upon a secret tryst (if you are unlucky enough while walking your dog). Take this image and sashay back to the 18th century, somewhere between Potsdam and Berlin, and you bring to mind the scenario in Liberté – only here both male and female characters are taking part.

The year is 1774, shortly before the French Revolution. Madame de Dumeval, the Duc de Tesis and the Duc de Wand, all libertines expelled from the puritanical French court of Louis XVI, and seeking the support of the legendary Duc de Walchen, a German seducer and freethinker in a country where hypocrisy and false virtue reign. Their mission is to export libertinage, a philosophy of enlightenment founded on the rejection of moral boundaries and authorities. Most of all they are looking for a safe place to pursue their quest for pleasure.

This louche cruising amongst elegantly attired courtiers and aristocrats sounds fascinating, and it is for a while  Slightly more portly but nevertheless soigné individuals duck and dive in the undergrowth, in various stages of undress, their white linens contrasting with tanned breasts and buttocks, larded legs and bloated beerguts. Very much like Sade, Serra explores the darker side of human desire but always with graceful discretion. The louche antic gradually become more and more explicit to the point where they actually gets a little close for comfort, eventually verging on the pornographic. Suggestive but never lewd Liberte is a clever game of subterfuge that plays on our curiosity and makes use of a richly textured soundscape to create a atmosphere of sultry expectancy. There is no narrative as such just a series of enigmatic vignettes that take place during the hours of darkness one balmy summer night.

Arriving in painted palanquin borne by his henchmen the Duc de Wand (Baptiste Pinteaux) is recalling the execution of an unfortunate individual whose limbs were pulled one by one from his body. Obsessed by bestiality and golden showers, he loves to salivate over his lascivious encounters, that often involve dogs or farm animals. Fortunately were are spared the most lurid encounters due to the bosky nocturnal shadows as Artur Tort’s roving camera spies voyeuristically on the other outré encounters taking place in the semi-darkness of the eucalyptus trees (eucalyptus trees in the 18th century? – check continuity).

Decadence is the watchword here as none of the trysts is particularly joy-filled unless you are into sado masochism or subjugation. The tone is subdued rather that lascivious, poe-faced even. The film’s enigmatic title suggests that these aristos have too much time on their hands and nothing left to lose as they skip the light fantastic in the lush setting of a midnight night’s dream: Serra’s film may not appeal to everyone but it is certainly a brave and visually alluring meditation on permissiveness. MT