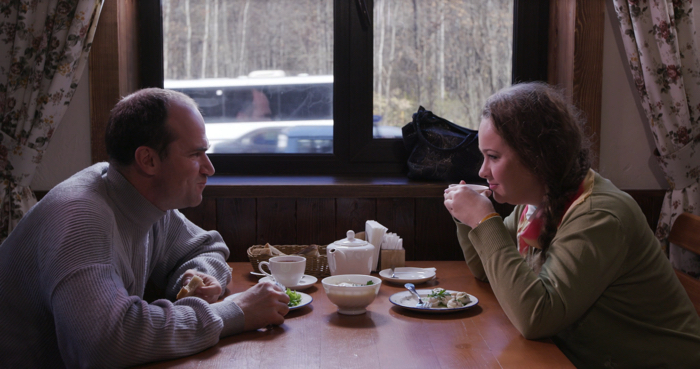 In her chronicle of life in a Russian village Larisa Sadilova has tried to integrate ethnographical elements with a predictable story of marital discontent. The result is rather a lightweight comedy drama that sits uncomfortably in its wonderful rural setting, trivialising the community’s more interesting past.

Feint echoes of Andrey Konchalovsky’s impressive village drama Postman’s White Nights (2014) rapidly fade away within the opening scenes – this is a beast of a different colour, and not nearly as resonant or memorable.

The story unfolds during a year in Trubchevsk on Russia’s Western border with Europe, known for its Jewish craftsmen who fled or were massacred in 1941, along with the old and mentally ill. Buxom blond knitwear designer Anna (Kristina Schneider) is unhappily married to Yura (Yury Kisilyov) with a young daughter. She relies on hitchhiking in passing vehicles to ply her trade in the nearby towns. One day she jumps aboard her neighbour’s lorry and one thing leads to another.

This a place full of gossip and bored housewives. But Anna (Kristina Schneider) manages to keep her affair undercover for a time. Her long distance truck driver lover (Egor Barinov) keeps promising to leave his wife Tamara (Maria Semyonova) and their son, but hopes he can have his cake and eat it (“everything will work out”), so they find somewhere to conduct the affair, renting an idyllic wooden house from an old lady who shares stories of how she dealt with her own difficult marriage and this provides a source of humour in the otherwise facile story: (“keep your mouth full of water, then you won’t say too much”).

Anna’s unsuspecting husband believes that away on work trip to Moscow, but when her lover’s truck breaks down, events come to a head. Sadilova exposes the sad nativity of some marital affairs. Consumed with their lust for each other, the two haven’t really thought things through. The only wise women are the village elders who at least have the upper hand in the family, the younger ones are spirited but lack the independence to really follow their dreams, and they still pander to the males, making them rather sad and unfulfilled.

All this plays out against a far more important story, Trubchevsk’s preparations to mark the 75th anniversary of the town’s liberation from the Nazis. MT