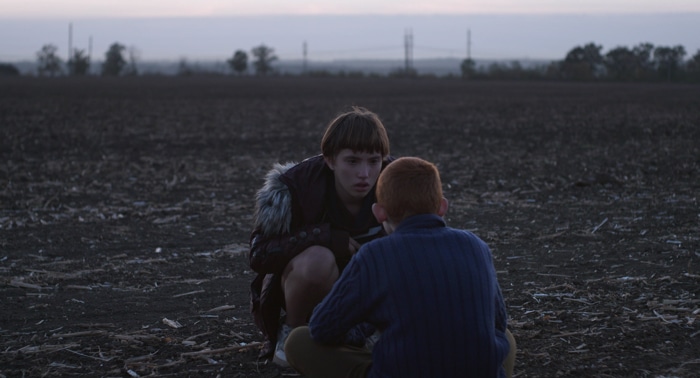 After making not one but two films about the famous artists’ residence Slovo House in Kiev, Taras Tomenko explores another part of Ukraine with this timely dystopian look at the eastern city of Toretsk. Here children have to wade to school every morning through mountains of debris and bombed out buildings, just 500 yards from the front line between Ukrainian and Russian troops. Misha Lubarsky’s camera is relentless in its hyper-realistic style – with Tomenko avoiding a ‘talking heads’ approach in a visual tour-de-force.

Anyone reading the papers will know that a ‘hot’ war has been raging in the region since 2015.
Homes have been razed to the ground and the few which are still habitable have been reduced to shell-marked hovels. Nearby, in the countryside, only the shaft towers of disused mines still stand. And this is a ‘playground’ for fourteen-year-old Anastasia (‘Nastia’) Danilova whose father was killed by a bomb that decimated their home. Fending for herself amongst the rubble she teaches a boy to cry without blinking. “Boys usually don’t cry” says Nastia. Arseny, a few years younger, has found a “step father” after his parents split up, a grave digger in a Stars Wars tee-shirt who buys him clothes. Arseny and Nastia scavenge for scrap metal and finally find a dealer who gives them 30 hryvina for their collection of 30 kg. The kids roam around unsupervised; there is always something new to discover, like an old theatre with its stage still standing.

At ‘home’ they watch DVDs on an age-old computer, or play games or their handheld game consoles. “Life is not an SIM game”, one of the few father remarks, but this does not impress the youngsters who have to fight off wild dogs while unearthing scrap metal. We watch Anastasia on her train journey to the big city to visit the archaic passport office – she must apply before the age of 15 – or she will “be in trouble”.

The nearby mall advertises “European Quality” goods, a huge map of Asia hangs on the wall, with the old USSR dominating in red. Later one of the children will find volume one of Lenin’s writings; hoping that it will fetch a good price. Nastia then visits a church where the orthodox priest gives a sermon. The adventure ends with her trying on make-up and eye-liners in a club where she dances on the strobe-lit stage. Terykony leaves the audience with no doubt about the future of the children of the debris mountains, even though they look out for each other the squalid childhood will haunt the rest of their lives. AS