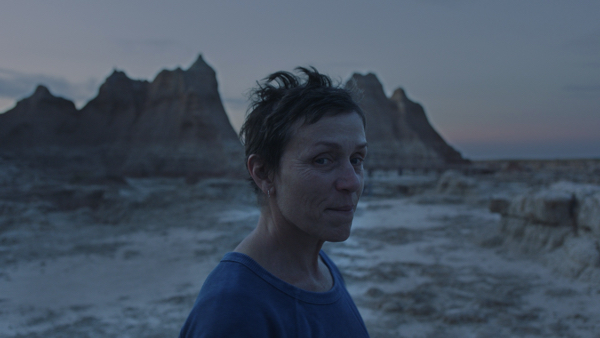 A woman loses everything and embarks on a epic journey across America’s midwest  re-discovering her heart and soul.

Nomadland is the follow-up to Chloé Zhao’s breakout indie The Rider and captures the same spirit of emotional release and redemption in the big country as the 2017 award winner. This time with a fatter budget and star-power, the Chinese director adapts Jessica Bruder’s 2017 autobiographical study “Nomadland: Surviving America in the 21st Century”. The nomads in question are victims of the 2008 financial crisis – now in their 60s and 70s – live in camper vans and trailer parks, not unlike the Hobos of the Great Depression.

Shot in Nebraska, South Dakota, Nevada, Arizona and California, the film is carried by Frances McDormand who is the quietly resilient Fern, a vigorous defender of her freedom: “I am not homeless, I am houseless”. Since her husband died and her employee folding – shutting down the entire town of Empire, Nevada (including the postcode)  -. she has joined the growing army of casual workers taken to moving around the vast expanses of the mid West in a camper vans, rather than returning to the (now broken) places of their youth. Something has changed for good: and instead of yearning for security they celebrate real American independence – with all its drawbacks –  a private plumbed in lavatory, or the lack of it, is one. And talking of toilets, Fern now cleans them in restaurants as one of her casual jobs, Another is being an “Amazon Ant” in a huge warehouse, possibly not much different from the factory floor back in Empire.

Fern – McDormand in indomitable form – gets a proper introduction to life as a traveller by a pioneer of the movement: the anti-capitalist orator Bob Wells, who plays himself. Long-term cancer survivor Charlene Swankie, is another. Charlene  is philosophical about her terminal cancer: as long as she avoids hospital, she can cope. A string of small encounters make Fern’s story memorable, young Derek Endres remembers her generous gift of cigarettes when they meet by accident again; a Shakespeare Sonnet is a point of reference for longing and loss they have all endured. “See you down the road” becomes the travellers “mot du jour”.

There are also long term relationships. Dave (Straithearn, one of the few professional actors), has a crush on Fern. After he decides to go back and live like a proper grandfather to his family, he invites Fern to visit him and offers her the shelter of a comfortable home. She is tempted – at least for a while. But when she leaves the house at night for the security of her van, we all know what will happen.

And then there is her sister Dolly (Smith), who represents the life she has left behind. Fern visits on the pretext of borrowing money, but declines the invitation to move in despite her sister twisting the emotional screws: “Your leaving has left a big hole”. But Fern has found a new direction from the ashes of her past.

Back on the road and bathing naked in a lagoon, Fern is at one with nature come rain or storm. The desert is like a magnet, replacing the longing for an orderly way of life: the strictures of yesterday have been replaced by serenity as she draws strength from solitude, and herself. In the end, her father’s phrase:”What’s remembered, lives” sums up an atmosphere close to the Woody Guthrie songs of the 1930s, when solidarity was born out of a new rules of survival. And this is the positive message of this life-affirming film about true spiritual status quo: when we become truly at one with ourselves.

DoP Joshua James Richards images, particularly of the desert, are quietly mind-blowing, yet his scenes of the daily grind and other “inconveniences”  do not stint in grubby detail. Frances McDormand’s performance is an understatement bordering on the miraculous. She represents stoicism, unflinching and without compromise, finding poetry in the everyday, she carries the past without denying the loss, striding forward to another exciting meeting with a new friend down the road. AS