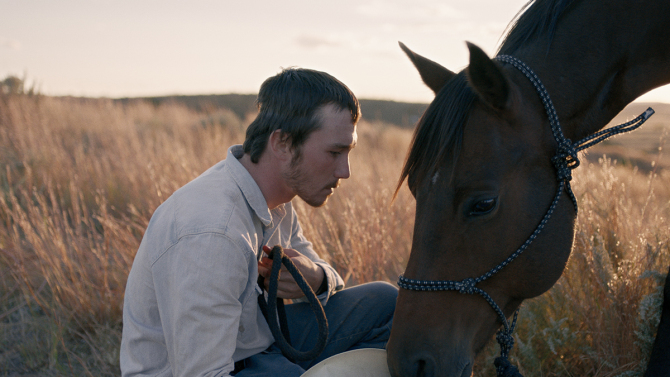 Chinese-born Chloe Zhao is a writer, director and producer known for her previous Cannes outing Songs My Brothers Taught Me. THE RIDER, her second feature selected for the Directors’ Fortnight and has won the National Critics’ Aeard. It’s a poetic cinema vérité drama that explores themes of male pride, family loyalty and thwarted ambition through a moodily soulful young cowboy who is unable to continue his vocation in the rodeo circuit due to a life-changing injury.

Enlived by the magnificent mountains and windswept prairies of America’s Badland’s National Park, South Dakota, a cast of non-professional actors Brady Jandreau, Tim Jandreau, Lilly Jandreau and Lane Scott star alongside Cat Clifford, who appeared in Songs My Brothers Taught Me, make this resonant action drama feel both authentic and  informative on the subject of horse training and competitive riding.

Zhao convincingly conveys the wild excitement and thrilling danger of this male-dominated world where young cowboys are addicted to the high octane buzz of the rodeo the narrative sizzles with angst and poignant moments, where macho bravado must be tempered with patience and gentle coaxing required to tame and tackle the wild horses and train the, to be ridden, and this is where Brady has an innate ability.

Brady dearly loves his family, his father is a disappointment to him, drinking and gambling on the slot machines, but he also fails to comprehend the weight of responsibility left to his dad when Brady’s mum died leaving him to bring up his two siblings: his brother has been left brain-damaged from a rodeo accident and his kind-hearted sister clearly has learning difficulties. But after a fall competing in the circuit where he was once a leading star, the film’s unsettling tension derives from Brady’s bitter struggle to fulfill his future in the outside world, a pale comparison to his life in the wild outdoors, and he constantly torn between reality working in the local supermarket, and his desire to get back in the wild riding and training with his horses.

But this is Brady’s film and he gives a mesmerising and deeply moving turn with echoes of Montgomery Clift in The Misfitas, as a man so deeply connected to the land and his horses that he doesn’t know where else to go. MT