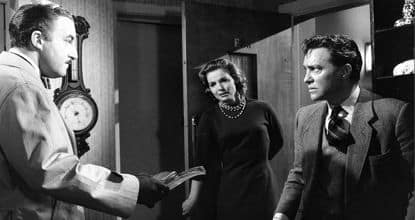 This meaner, uglier British version of Bicycle Thieves was a key film both in Peter Sellers’ development as an actor and as a human being, it being his first attempt at a heavy and also because he took the role home with him each night, which placed a terrible strain on his marriage for reasons only too obvious if you watch it.

Modern audiences probably don’t even know what a Ford Anglia was, but the moment when Sellars’ boot comes crashing down on a terrapin it still elicits gasps from people who’ve unflinchingly sat through Peckinpah.

Henchman David Lodge seems suspiciously loyal to Sellers’ character (always addressing him as ‘Lionel’). Kubrick at the time was a huge fan of Sellars so he almost certainly saw this film; is it merely coincidence that both this and ‘Dr Strangelove’ employ ‘When Johnny Comes Marching Home’ on the soundtrack? @RichardChatten