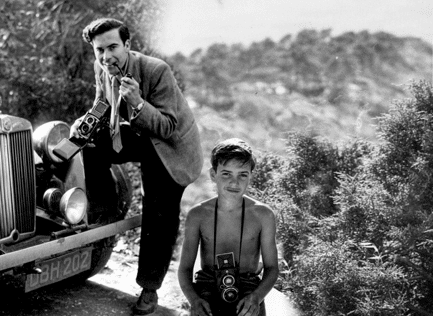 British documentary filmmaker Nick Broomfield (Marianne & Leonard – Words of Love) has created a loving portrait of his father, Britain’s pre-eminent industrial photographer Maurice (1916-2010), Despite their ups and downs what shines through here is a genuine warmth and filial respect My Father also serving as a social history of the British working class since the end of WWII.

Maurice’s photos and Nick’s creative output makes this an especially enjoyable father and son portrait: Maurice Broomfield (1916-2010) started his working life on the floor of the factories in Derby where he was born. Taking a degree in photography at night school, he became the chronicler of the excellence of British production, be it Phillips Nuclear Power or Rolls Royce – his brilliantly-crafted photos showed a glamorous, even romanticised image of the workplace, with the craftsman in midst of his products.

Maurice was a contentious objector in WWII and remained a pacifist all  his life, but he was still able to see the positive factors in life and work. In 1947, he married Sonja Lagusova, a Jewish emigrant from Czechoslovakia, who had lost half her family in the Nazi concentration camps. She hardly ever talked about her Jewish identity and Nick, born in 1948, only learnt the stark facts that had traumatised his mother for life, in his twenties. In Derby, Maurice’s parents had already picked a local girl for him to marry and were nonplussed at his choice of Sonja,  relations between them never recovering. Nick, like his father, was not a good student at all, he was expelled and later went to boarding school. Afterwards, he joined his father on his photographic tours around Britain’s factories, and had his first crush on Maurice’ assistant Barbara. Nick’s grandfather Gogo worked on the film about the liberation of Bergen-Belsen concentration camp, and he and his daughter were somewhat critical of Maurice’s rather optimistic attitude towards society and life in general.

Nick’s work, on the other hand, shared the more critical attitude of his mother’s side of the family. “My Dad and me were competing for Sonja’s approval”. Meanwhile, Maurice tried hard to “unlearn’ his working class accent, his first studio was located in the grounds of the  Lady Crossfield’s estate; he even met the Queen. The gulf between father and son widened after Nick married fellow documentarian Joan Churchill (now divorced), the couple have a son, Barney. Their documentary Juvenile Liaison (1976), about an eight-year old boy who stole a toy pistol, and is then shown the inside of a jail by a policeman who frightens the child with dark stories, was banned for thirty years, and could even then only be shown to criminologists.

Maurice did not accept that his son had a different outlook on society, after the private showing of Tattooed Tears (1982), he simply left the screening room without saying a word. After Sonja died at the age of 59 of skin cancer, Maurice fell into a long depression. Father and son reconciled in the wake of Maurice finding a new life with Suzy, who re-kindled his lust for life, taking on painting, and losing his inhibitions. The family saga ends with Maurice, Nick and Barney (who is one of the DoPs of Father) sitting happily together on a bench “talking about nothing in particular”.

The writer/director combines the generational conflict with a short history of how Britain changed from the hopeful new beginnings of 1945 to the social divisions that now face the country. Unfortunately, we are still far away from the reconciliation and mutual acceptance of the three generations of Broomfields. AS

The V&A museum will host a Q&A screening on 4 November of Nick Broomfield’s MY FATHER AND ME exploring his relationship with his father, photographer Maurice Broomfield, to tie in with a display of photographs and book Maurice Broomfield: Industrial Sublime opening at the V&A on 6 November.  BBC Four will also air the film in November and stream on BBC iPlayer. More info below and V&A info here – Link