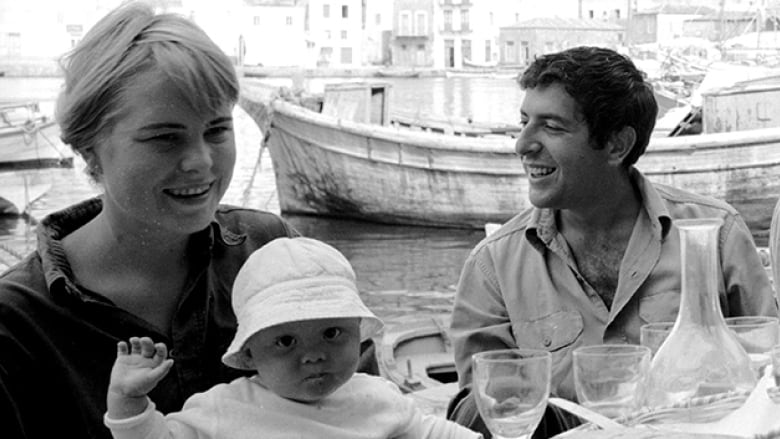 Veteran filmmaker Nick Broomfield (Whitney: Can I Be Me?) tries to unravel one of the greatest love stories between artist and muse: Leonard Cohen and Norwegian Marianne Ihlen met 1960 on the Greek Island of Hydra, a sunny place for the counterculture of hippies who wanted to get away from a cold, organised northern hemisphere, where emotions were as cold as the weather. Whilst their relationship lasted seven years, they lived with each other’s shadow until the very end: they died within three months of each other in 2016, and Cohen’s beautiful farewell message to the dying Marianne makes up, at least a bit, for his lifelong philandering.

Cohen came from a well-to-do family of Jewish emigrants from Lithuania and Poland who had settled in Quebec, Canada. Aviva Layton, married to the poet Irving Layton (“Poets don’t make great husbands), the latter taking Cohen – who started off as a writer and poet – under his wings on Hydra, classifies Leonard’s mother Marsha as “Mad as a hatter, Oedipally mad.” It became soon clear that poets were not the only artists who were useless husbands. Ihlen was also looking after her son Axel, from a failed marriage with a violent Norwegian writer, and was quiet happy being Cohen’s muse he insistered on having his sexual freedom – like many males (not only in the hippie environment). A much older Cohen can be quoted saying “I was always escaping, I was also trying to get away.”

After the total flop of Cohen’s first novel Beautiful Losers (1966) he turned to music, but he was so insecure abut his voice, that, as Judy Collins reports “He would at first only come on stage with me”. A year later, Cohen was off to on a “hedonistic odyssey”, the excesses well documented by band members and tour organisers. We can see Cohen literally wading into his female admirers, who were waiting for him after the concerts. We do not know when exactly Marianne said her farewell but she returned to Oslo, took a secure job, married (the same man twice) and looked after Axel, who had to spent long periods in institutions.

Broomfield skips over chunks of the 1970s and 80s, and takes up the story in 1994, when Cohen became a monk in a Buddhist monastery in California. After leaving, he found out, that his business manager (and friend) had spent all five million of his retirement account, and Cohen went back to touring, earning well over USD per year. He sent Marianne first row tickets for his concert in Oslo, and we see her singing “So long, Marianne”: a wise woman who had not lost her love for a man who hardly deserved it.

Broomfield, who spent some time on Hydra with Marianne and Leonard, certainly knows his subject and the era of free love – too often an excuse for men to be promiscuous – while their female muse looked after their domestic needs. Leonard Cohen’s oeuvre, the work of a low-level depressive, has certainly influenced a generation, and it is only fitting that Marianne & Leonard tells the story of the woman who influenced him – and who, even on her deathbed, puts her feelings for him into words. After being read his farewell message, in which he mentions that he ‘is just behind her on the way’, she exclaims: “This is beautiful; but, poor Leonard, he has no Sue to massage his feet”.  AS