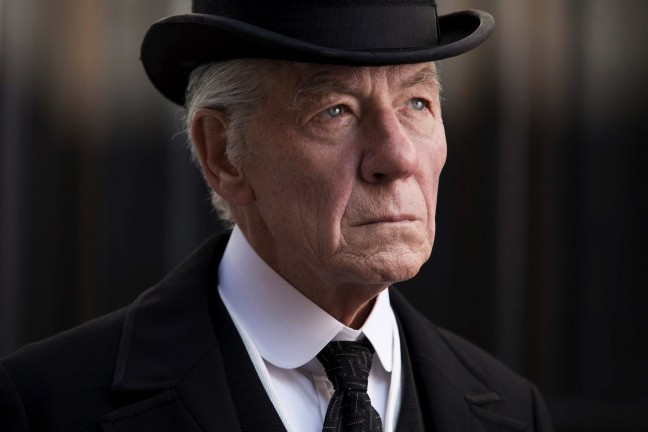 It is 1947 and Sherlock Holmes (Ian McKellen) is now in retirement in Surrey, assisted by his housekeeper Mrs Munro (Laura Linney). Now 93, he has been retired for 30 years, and feeling that he had failed in his last case has made him rather grumpy and not a very happy man. His former colleagues – Dr Watson, Mrs Hudson – have died and Holmes feels even more alone. His main joy is beekeeping which also interests the widowed Mrs Munro’s young son, Roger (Milo Parker). He recognises that Roger is very bright and, in his direct manner, tells Mrs Munro, “Exceptional children are often the product of unremarkable parents.”

Holmes ponders on his last case; remembering Ann Kilmot and her husband’s instruction to follow her to see what she is up to. Through his detective work Holmes manages to work out that although Ann seems to be plotting to kill her husband in fact she intends to kill herself. The rest of Ann’s story is harder to discover and it is that which makes Holmes admit failure. He does not agree with Watson’s written story in which Holmes becomes the hero of this particular case.

In the early scenes we see Holmes returning from a trip to Japan where his host Umezaki Tamiki (Hiroyuki Sanada) tells him that he believes Holmes was involved in the disappearance of his father in England. This is yet another mystery for him to solve as his formerly strong memory has deteriorated and he can’t even remember meeting Umezaki’s father.

The starry cast of well-known actors includes Roger Allam as Sherlock’s doctor, Frances de la Tour as a kind of mystic who mentors Ann Kilmot, Phil Daniels as a police inspector and Hattie Moran as Ann. Laura Linney manages an impeccable English accent and, as usual, gives a most sensitive performance. The boy, Milo Parker, is just right as young Roger and he and McKellen work very well together. Of course the film belongs to McKellen who embodies the ageing detective in a realistic manner. In fact he plays two different ages – younger Sherlock in the scenes showing his interaction with Ann and the present day 93-year-old.

This is a gentle character-driven movie about the older and then very old Sherlock Holmes. It has a lot to say about ageing and nearing the end of life and also about love – the love of Mrs Munro for her son and her memories of a loving relationship with her husband and now being without him and the deep affection of Sherlock for young Roger. Carlie Newman.