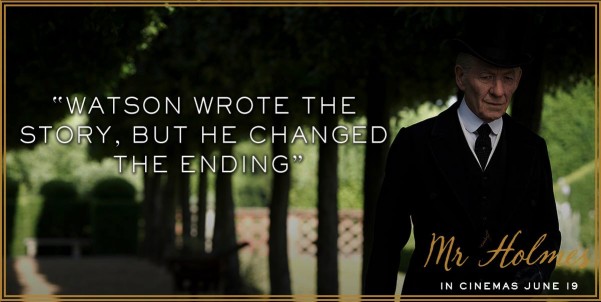 In Conversation with Ian McKellen and Laura Linney | Mr Holmes

Sherlock Holmes is one of English literature’s best known, and best loved characters. In MR HOLMES an older, retired Sherlock Holmes looks back on his life and grapples with an unsolved case involving a beautiful woman. Carlie Newman met the leads IAN MCKELLEN (Sherlock Holmes) and LAURA LINNEY (Mrs Munro) to talk about the central themes of Bill Condon’s drama:

Laura: What I loved about the movie was that there are many different themes, story content; interesting dynamics, dealt with in a very different way than before. We see things that are not always what one expects – different perceptions.

Ian: There’s a plot and also themes: one of which is very touching: someone (Sherlock Holmes) who we think we know well, someone who we perhaps wouldn’t want to spend much time with, turns out to have a beating heart that he’s trying to catch up with after spending years trying to run away from. And he wants to catch up with his emotional life and he’s a much nicer person than he was at the beginning. And so there’s hope for us all, I suppose.

Haunted by something that feels unfulfilled?

Ian: He doesn’t do things by half; he keeps right on to the end to solve the case. Dr Watson wrote it down as another triumph, but Holmes doesn’t do any other sleuthing for 30 years – is that will power or stupidity? He goes off to Japan to get some kind of elixir to keep the mind going. The result of all this is to discover that he’s living with a woman [Mrs Munro] who genuinely cares for him

Ian: dreadful cook!…and a friendship with a boy who is wiser than his years. And a film that has a happy ending, really.

Are you concerned that you might take some criticism of the way you’ve portrayed Sherlock?

Ian: No. As I said, at the end of the story he’s portrayed as a far more pleasant and sociable person than he has been for the rest of his life. So I think Holmes comes out of this story rather well. It is another play on his earleir character. I like the way that it’s possoble to sit at the film and believe that Conan Doyle had written it. Obviously he hadn’t. I’ve not had any complaints about trampling over Sherlock Holmes. So many actors have…hundreds. And I throw out a challange to you – who was the first actor to ever play Sherlock Holmes on film? He’s an anonymous actor, I think Hungarian, it’s a mystery!

There have been some great Sherlock Holmes; I used to listen to John Gielgud on the radio. John Gielgud played him. Ralph Richardson (another hero of mine) was Dr Watson. Orson Wells played Moriarty! So Sherlock Holmes wasn’t invented even by Jeremy Brett or the more recent successes Benedict and Robert Downey and good luck to us all, I say. Derek Jacobi will be playing Sherlock next! 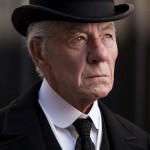 Holmes is a mentor to (IAN: 10-year-old Milo). Did you ever have a mentor when you were growing up?

Ian: There was Uncle Cliff – who wasn’t strictly an uncle – who, when I went up to University, offered me £5 if I would never smoke a cigarette. Not a big enough bribe as it turned out. The teachers at school, I shouldn’t forget them: well, those who cast me in plays, I suppose. Frank Green – he taught me that the number one duty of an actor was to be audible and his way of checking this was to walk away from me, out of the doors. Eventually he came back in, “Yes, I heard every word.”

How are you in your own company?

Laura: There’s a big difference bewteen loneliness and alone. I love alone. I need some alone time; I like to ponder and think, touch on people I’ve known and memories and wishes. Loneliness can be very very hard and loneliness can drive someone crazy. I think Mrs Munro is very lonely and Sherlock has been lonely by choice. And so there’s also the difference between the two – between someone who has exiled themselves [Sherlock] and someone who has been robbed [Mrs Munro]. I like people, I like being around people, but there’s only so much you can take in and I get to the point where I need quiet.

Taken that you’ve read some of the Sherlock Holmes tales, did you get inspirtation for the older Mr Holmes from these?

Ian: No. In that I long learnt that if someone has taken the trouble to write a script, any suggestions that I have about omissions from the source material is too late, they’ve thought about all that, my ideas are just likely to be boring, irrelevant, unnecessary. Which does relieve you if you’re playing Hitler – which I have done – from reading enormous biographies of the monster. Of course you want the script to be good, and this one was. This is a peach of a part for any actor and I’m vey very lucky that I knew Bill Condon [director] of old so he thought of me …other actors are now tearing whatever hair they have left!

Laura, you were a fan of Sherlock Holmes?

Laura: Yes, I guess I was a little obsessed with him from the age of 11. My father bought me the book. I loved the movies, I loved Basil Rathbone. When I applied to drama school they asked me on the application form,“who’s your favourite actor.” I wrote “Basil Rathbone.” I love the world, there’s something sexy about the fact that he’s a loner, a drug addict, a musician. He’s brilliant.

Was playing Sherlock Holmes one of your unfulfilled ambitions?

Ian: No. If I ever thought about it I would have considered I was too old. Like everyone else I thought he was a real person. It is exraordinary.

Laura: it is amazing that one character can be picked up through so many decades and be put in so many different contexts: the psychological or the more physical as portrayed by different actors. There are not many charcters that have had such a workout and people are still interested.

Ian: I’ll tell you what continues to be an ambition, it’s a quote from Gods and Monsters, my character, the film director says, “Making movies is the most wonderful thing in the world; working with friends, entertaining people.” This film was that in spades – there was Bill there, Laura (I’ve enjoyed working with her). Then it was like a party at my house: Roger Allam playing the doctor, Frances de la Tour, from Vicious, playing the mad music teacher, Frankie Barber finds her way into the movie, and David Fox who plays the pharmacist; it was so joyful. And the audiences are enjoying it.. That’s a bonus, the raison d’etre. 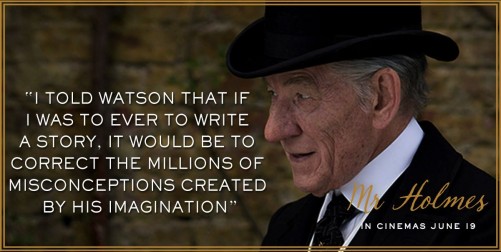 Ian: He fell in love over a bee. He followed this woman on a case, he’s being paid, he got intrigued, he fell in love. She offered him a life together, he turns her down. He denies his heart and 30 years in the wilderness, wondering what he did wrong. He was paid to be the observer, then one day, love!

Have you got involved in any of the controversy over the re-invention of Sherlock Holmes?

Ian: I can’t comment on the legal situation, although I note there was no complaint about the novel. It’s not as difficult or puzzling to play a character that so many other people have played as you might think. I played Hamlet – if you started to think about all the people who’ve played Hamlet, you’d never step on to the stage. You do because you know that so many people who’ve played Hamlet have had a success, so don’t deny yourself the possibility. Discovering something within yourself. And that’s true for Romeo and Juliet, King Lear…. And so with Sherlock Holmes. So many famous people have played the part. The difference with this is that my Holmes is a script that nobody else has done and, of course, it’s inspired by Conan Doyle.

Laura: The difference is he wasn’t written to be embodied originally. But the famous parts they’re there to be done. I’m a big proponent of keeping the exploration going, paticularly if it’s a character that will hold the weight of such exploration.

Laura congratulations on your impecable accent. Did you take any momentos from the film?

Laura: It took them a while to decide on what sort of accent they wanted. We landed on Sussex and my fantastic coach worked very hard with me.

Ian: I took my hat! I never knew where she came from but I knew it was incredibly real . The most difficult thing when doing a foreign accent is not to copy someone. Your voice, Laura, came from right inside yourself.

Laura: She probably moved around. It’s a combination of sounds. 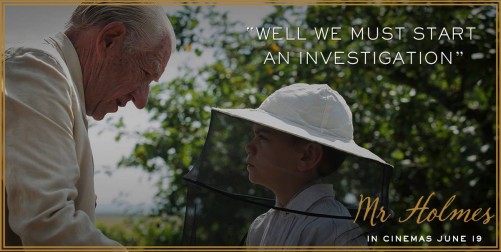 What does Sherlock Holmes mean to you as a character?

Ian: Well, I’ve just turned 76, he’s 93. I think, “Don’t give up. Even right to the end there’s more you can discover about yourself and the world.” That would be a good motto for an old person to have. And old people I know who are keepimg at it are really enjoying their lives, even with all the aches and pains.

Is there one particular accolade that you prize above all others?

Ian: I was up in Wigan where I spent the first 12 years of my life and in the ‘I believe in Wigan’ Square there are a number of stars of people who lived in Wigan and done themselves or the town proud and I’m now one of those stars. And I got a bit weepy because I’d walked over those cobbled stones as a kid every Saturday going to the fair or watching the people selling their stuff in the market. That’s at the forefront of my mind today.

Laura: I won a limbo contest on roller skates.

Did you do research on the dementia side of your character?

Ian: I just went inside myself and I went for the decreptitude of the body and the mind and put all my efforts into trying not to have either. You can read all these manuels but it doesn’t help –it might help your doctor or your shrink or with medication but actually embodying soemeone whose mind and body are beginning to fail – we have intimations of mortality frrom very early on and I’m a bit more alert to them than other people and you feed off that experience I think.

I spoke to Ian McKellen as he waited for the lift. I told him how good the film was and congratulated him on his excellent perfomance. I remarked that it was much better than Vicious on TV.
“That’s like marmite.” he answered, thanking me. Carlie Newman.