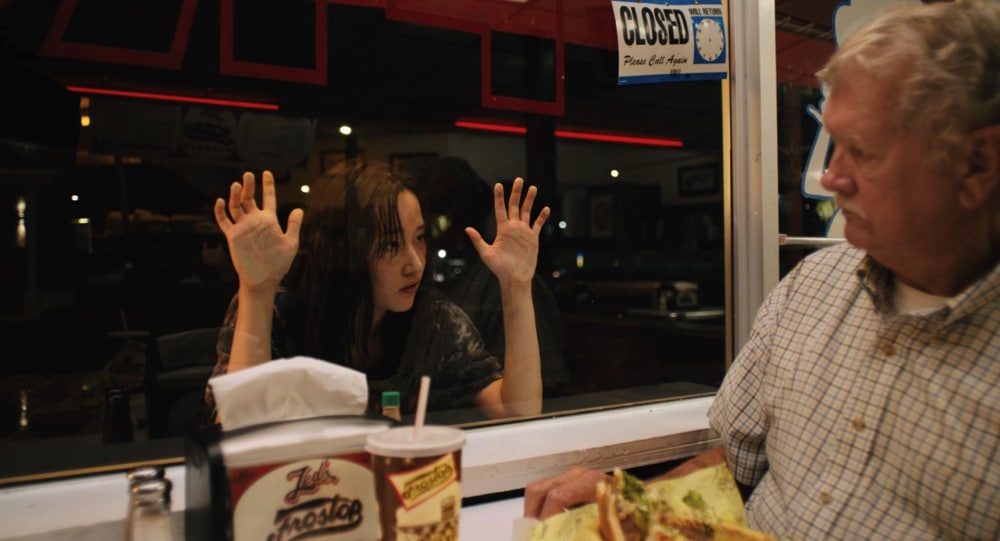 A Korean teenager’s hypnotic powers create havoc in a suburb of New Orleans in this second feature from from Ana Lily Amirpour whose stylish debut A Girl Walks Home Alone at Night (2014) felt radical and edgy back in the comparatively tame world of 2014.

One again wrapping her story round a lone woman, Jeon Jong-seo makes for a feisty Mona Lisa, the teenager in question. A diet of junk food and soft drinks has nudged her into the autistic spectrum, but her kinetic powers soon come in handy in the confines of her high security psychiatric ward, enabling her to overpower the abusive warden and she escapes into the night. Embarking on a frenzied foray powered forward by a seething soundscape, and aided and abetted by friends Fuzz (Skrein), stripper drug dealer cum DJ Bonnie (Hudson) and son Charlie (Whitten), she is hotly pursued on her odyssey of destruction, by a police officer undeterred by his plaster cast.

Very much a bedtime story for adults this is a less appealing rif on Jonathan’s Glazer’s Under The Skin: underdog Mona Lisa morphing into the exotic heroine from far away, mastering, while not comprehending, the rules of the planet she has landed on. Mona Lisa just stays her spontaneous self, surrounded by machiavellian schemers (apart from Charlie). Her motivation is not power or money, but freedom – the desire to avoid capture and imprisonment becomes paramount in her dystopian crusade.

This is an unashamed B-picture where rules are suspended, and emotion became the primary focus: reality is submerged by the heroine’s sheer willpower and self-determination. DoP Pawel Pogorzelski’s neon-drenched aesthetic underlines the narrative’s artificial world, that hangs somewhere between Twilight Zone and a non-realised David Lynch project. Mona Lisa is just pure excitement, the supporting half of a double feature which turns out to be much stronger stuff than the main attraction. AS