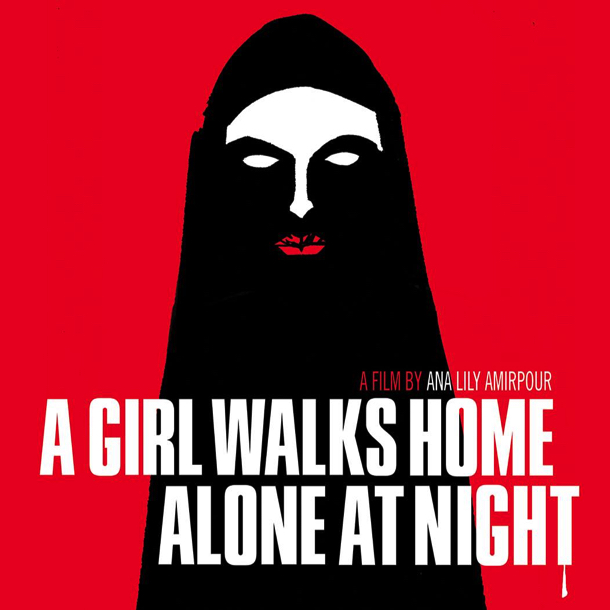 Ana Lily Amirpour’s first feature is one of the most distinctive of recent years. The young UK born Iranian filmmaker’s exhilarating visual language feels more important than the simple narrative but her striking monochrome aesthetic is both stylishly retro and contemporary.

In the hostile industrial landscape of an oil refinery town named Bad City, a man retrieves a pet cat from behind the railings of a building site. This is Arash (Arash Marandi) – a Middle-Eastern James Dean – who, apart from his matinée idol looks is also well-mannered and kind: a refreshing take on Middle Eastern man. Arash is caught between his drug-adict father and the tattooed dealer (and pimp) try to call in his loan. But as his father is up to his eyes in debt, the pimp decides to take Arash’s car in payment, forcing him to walk the streets at night where he meets a lone woman in black Islamic garb (Sheil Vand) and gradually a love affair blossoms, quite extraordinary in its singularity, yet evocative of Jim Jarmusch’s Stranger Than Paradise.

With an idiosyncratic soundtrack and striking performances from the leads this is a quietly mesmerising first feature marking Amirpour out as a distinctive voice in modern US/Iranian cinema. Amirpour followed her debut with The Bad Patch that translocates a similar lone female to the desert – with a starrier cast of time is Suki Waterhouse and Keanu Reeves. Since then she has broken into TV directing eps of Castle Rock, The Twilight Zone and Homemade and is currently working a new feature Blood Moon, again wrapped around a central female character, this time Kate Hudson. MT