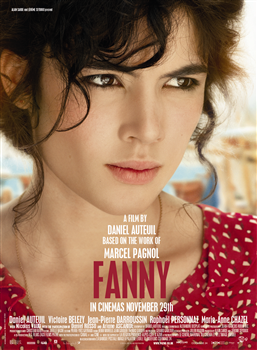 Marcel Pagnol’s work is still popular in France, especially among older viewers who made up the lion’s share of the audience at the Cannes Film Festival screening.  FANNY is the second film in the trilogy and the last segment (CESAR) is still in development.

Daniel Auteuil directs and acts (as Cesar) using the same cast and crew as for MARIUS (the first part – which deals with his longing to be a sailor) namely Victoire Belezy as Fanny, Jean-Pierre Daroussin as Panisse and Raphael Personnaz as Marius.

Marseilles accents and the maritime setting gives this light-hearted ‘chamber piece’ a very French feel but the classic plot line is universally satisfying, marking Pagnol out as one of the last century’s most renowned dramatists. Alexandre Desplat’s elegant score carries the dialogue-driven narrative through its paces, most of the action taking place in the confines of Cesar’s bar in contrast to the resplendent summery visuals of the wedding scene.

Fanny’s good-looking boyfriend Marius has set off to the South Seas on a 5-year contract, leaving her in Marseilles where she discovers her pregnancy.  Distraught at the idea of being an unmarried mother, Cesar secretly organises to marry her off to Panisse, a wealthy local manufacturer and drinking buddy, on the condition that the child will become his heir and inherit a considerable fortune.

Auteuil and Daroussin are convincing in their roles as traditional French men: Daroussin is sensitive and unassuming as the dowdy and much older suitor to the sultry young girl. Auteuil’s character is more ‘rough and ready’ but with a tender heart of gold. The coquettish Bezey does her best to conceal her disappointment at the marriage particularly as she’s still in love with Marius, who eventually re-appears in a showdown that pits the evergreen theme of wealth and social suitability against passion, love and sexual desire.  MT

NOW AVAILABLE ON DVD along with MARIUS