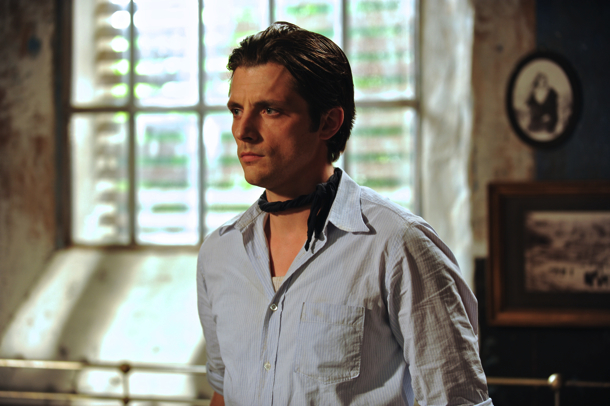 This is the first part of Daniel Auteuil’s adaptation of Marcel Pagnol’s sun-drenched Provencal story of 1920s ordinary folk which follows young lovers MARIUS and FANNY.  Intimate in feel and dialogue-driven, the focus here is on Marius and his wanderlust for the Southern seas.  Very much a chamber piece with entertaining performances from the well-known cast, we get the occasional glimpse of the glorious seaside location of Marseilles, set to Alexandre Desplat’s suburb original score.

Raphael Personnaz cuts a suave figure as Marius, the good-looking son of Danny Auteuil’s César, almost resembling an early Alain Delon with shades of Hugh Grant.  He has no interest in tending his father’s bar and despite his strong feelings for Fanny, is not yet ready to settle down. Meeting with some local sailors, they offer him a possibility to join a voyage as they set sail for the Leeward Island and Marius is determined to satisfy his yearning for the big wide world.

Jean-Pierre Darroussin’s Monsieur Panisse is much more combative and feisty in this segment, waiting in the wings with his considerable fortune for Fanny’s hand in marriage,and Marius is well aware of the fact and insanely jealous of his older rival.  But he refuses to confess his feelings or reveal the true object of his feeling even to his father.  Meanwhile, Marianne Chazel plays the neurotic Honorine, Fanny’s mother, and is getting very upset and excited over the young couples ‘secret’ love-making which she discovers by accident on returning home from her weekly visit to her sister in Aix En Provence.

But Fanny is not entirely convinced that Marius is ready for commitment, despite his feelings for her,  and she is under considerable pressure, for financial reasons and the future of her family’s respectability, to do the right thing.