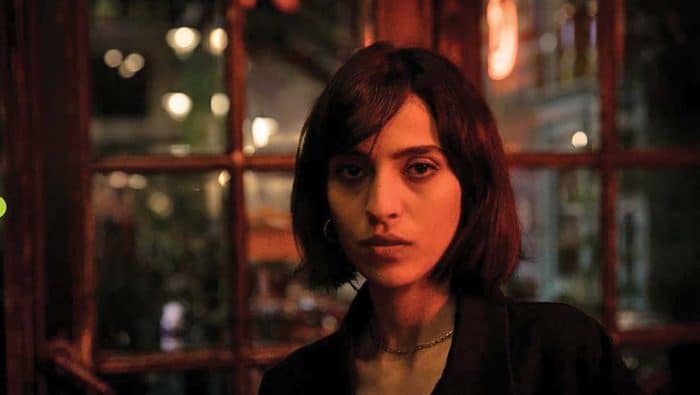 Gitai certainly brings out the exotic edginess of this Israeli port city bordering on the Lebanon in his feisty social satire that sees Palestinians, Israelis and Lebanese enjoying a local night spot.

Those familiar with the territory – political, cultural and social – will certainly appreciate a drama set in this complex part of the world Some of the intrigue will be missed by the mainstream unable to identify who’s who. And although we’re constantly led to believe by the British press that Arabs and Israelis are constantly at each others throats, Gitai shows us otherwise – in a multicultural set-up where opposites attract amid a heady brew of sexual chemistry that fuels the various interconnecting vignettes in a rather stagey drama with its awkward performances – often feeling as if the cast is just reading from the script. Yet there’s something mesmerising about the seedy characters. You might not trust them to post a letter, but they’re intriguing to watch

The setting is Haifa’s Fattoush Bar & Gallery adjacent to a busy railway line that occasionally drowns out the conversation between business people. And while negotiations are going on in the art gallery part of the venue, gay couples are carousing in another corner of the venue.

Laila (Maria Zreik, Villa Touma) is the owner of the gallery. She is married to canny Palestinian Kamal (Makram J. Khoury) who doesn’t give her credibility as a businesswoman or agree with the political nature of the photos in her current exhibition picturing the Palestinian Resistance, although he does appear laissez faire about her relationship with Gil the artist who shot them (actor and singer Tsahi Halevi) – the two are seen embracing before Kamal arrives on the scene.

There’s an odd scene where Kamal is accosted by a rather fiery young Arab woman (Behira Ablassi) who tries to bribe him for money by hiding in the back of his ‘top of the range’ Mercedes. He handles the situation with nonchalance cleverly giving her short shrift.

Gil entertains a sob story from his half-sister (Israeli actress and dancer Naama Preis) complaining about her sexless marriage. She turns her attentions to a good-looking young Arab guy who plies her with drinks before the two disappear into his car for a quickie.

In another part of the bar a stocky young black Arab is on a blind date with a bewigged Jewish widow (Hana Laslo). Candidly admitting he was expecting somebody younger, she confidently retorts: “I was expecting someone more Jewish”. A bizarre episode features Arab chef Hisham whose wife Khawla (Khawla Ibraheem) unwisely makes a play for his friend Gil.

Gitai’s snapshot of the Middle East feels very much like a filmed play – entertaining at times but also rather forced and artificial in its depiction of this multicultural social brew. MT