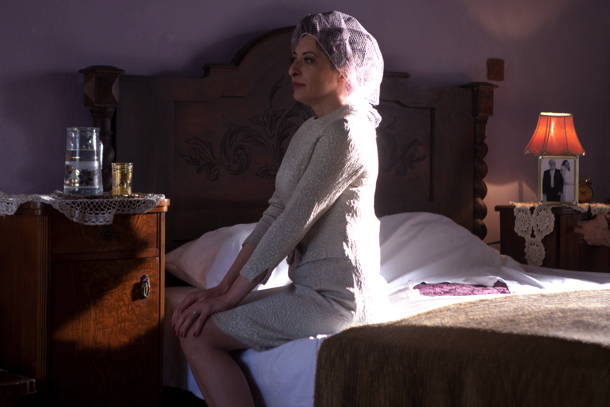 So many stories from Ramallah Palastine deal with conflict and war, it’s refreshing to see a female-focused drama about the Christian community. VILLA TOUMA, is the feature debut of writer/director Suha Araf, and although it was produced mainly with Israeli money (and a female Israeli crew), is a technically a Palestinian film, running under a stateless flag. Set after the war of 1967, it explores the rather old-fashioned world of three aristocratic Christian sisters, who take their orphaned niece Badia (Zreik) into their house of gloom, as an act of generosity and altruism.

Badia, the niece of one of the sisters and a Muslim woman, has spent her life in a catholic orphanage, but even this harsh environment has not prepared her for the loveless and cloistered life with the three sisters, ruled with an iron fist by the oldest, Juliette (Faour). Even worse is Violette (Tabari), a spiteful spinster (whose elderly husband died before the marriage was consummated), who hates Badia because of her youth. Only the youngest, Violette (Dabis) has any humanity, and tries to support Badia as much as possible. After vainly trying to marry Badia off to one of the very few Christian suitors of the rapidly declining upper-class Christians in Palestine, the girl meets an Arab musician and gets pregnant after a secret one-night stand in the garden of the villa. Badia’s pregnancy isolates her even more from the sisters, who feel threatened not only by her fecundity but also by her ability to attract a member of the opposite sex behind their backs, and when she suddenly gives birth, disaster strikes.

VILLA TOUMA is not a perfect film, it feels rather airless and stagey, but it carries its heart-breaking story with brilliant acting and a bijou aesthetic: the villa is really more of a mausoleum than anything else: the sisters have buried themselves in time, pretending not to have witnessed any change in society. Furthermore, their attitude towards Arabs, in the specific case their caretaker, who is treated like a second-rate citizen, resembles very much the position of the Israeli. Their poverty is obvious, but they try to pretend a glorious life style to the outside world, particularly when entertaining suitors for Badia – ignoring the fact, that nobody falls for their charade. Admittedly the semitic races in the Middle East do still engage in matchmaking of this sort (Jordan and Syria are no different). But these cloistered sisters live in denial, and are only too happy to devour each other out of self-hate. Badia is their victim, and welcomed only as such. On the few occasions, the sisters go out into the world, they seemed lost, without the aggression they vent against each other and Badia, and we see them for what they really are: left behind relics of a long bygone era.

The Camera pans through the house, picking up objects of the past, and treating the sisters alike: inhuman, they are part of the furniture. Badia stands no chance against these immovable objects; only once, when dancing with Violette, is she allowed to move like a young person. The claustrophobic atmosphere gobbles her up. VILLA TOUMA is a nightmarish vision, in which the three sisters try to vanish into a glorified past, alienating themselves from the real life outside. AS