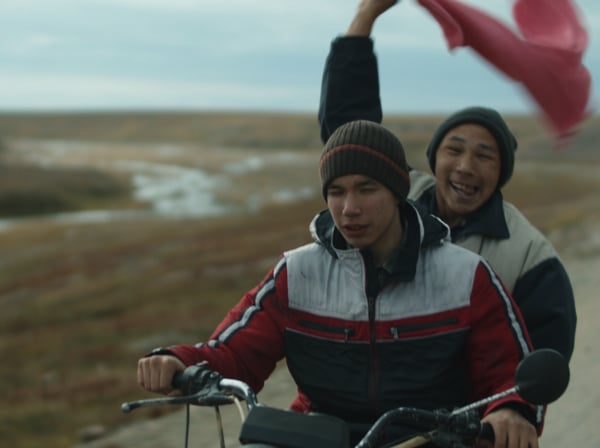 In a remote whaling village on the edge of the world a teenager dreams of a girl he met on the internet and sets off to find her across the vast wasteland of the Bering Strait that divides Russia from America. Kitoboy brings to mind Sarah Gavron’s 2012 feature Village at the End of the World, more ruminative and soulful in tone, but not without irony in the final reveal.

Loneliness, sexual awakening and whale hunting are given a poetic makeover in this thoughtful rites of passage drama seen through ‘whaler boy’ Leshka’s eyes. Desperate for a girlfriend and living alone with his dying father, he leads a very uneventful life out at the far edge of a male-dominated community where the longing for female companionship accentuates feelings of alienation, and wonder about the opposite sex.

The internet’s recent arrival in the village puts the young man in contact with attractive girls thousands of miles away who dance entrancingly on the screen of a constantly buffering erotic webcam chat site. Leshka can’t take his eyes off the girls as they leer and gyrate lasciviously before his tender glances. Yet he talks to them respectfully in an intimate and caring way, almost falling in love at first sight. Rather than treating these semi-porn sites as lighthearted entertainment, Leshka’s desire to find love fires a feral determination to discover the physical girl behind the camera, a journey that leads him into the real world in a bleak, boys’ own adventure where reality bites.

In his first feature film as director, award-winning Russian cinematographer Philipp Yuryev crafts a delicately unusual and visually resplendent low budget action drama about an experience that is relatable for thousands of men (and women) all over the world. The drama then turns into something unexpected and alluring with an eclectic and atmospheric soundscape that resonates and often dissonates with the film’s quirky storyline. At the same time Kitoboy connects with the narrative of surviving communities on the verge of extinction in the Russian Far North, whose cultures and customs are evocatively brought into focus in this stark but richly satisfying feature. MT