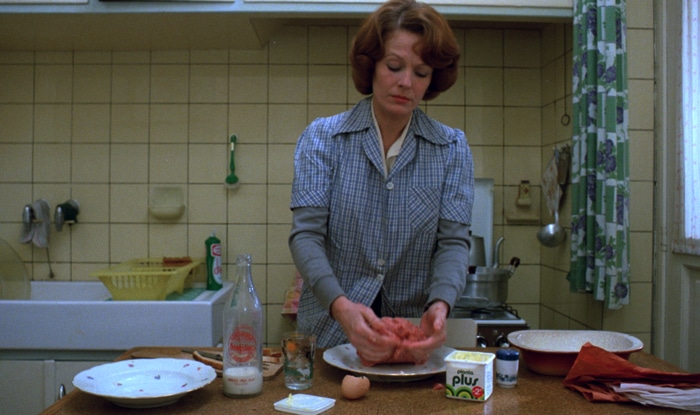 Ironic that Chantal Akerman’s epic of female loneliness has replaced Alfred Hitchcock’s Vertigo as the “Greatest Film of all Time” according to the “Sight and Sound Magazine’s 2022 Critics’ poll”. Hitchcock, the leading perpetrator of the male gaze, has finally been ousted by Chantal Akerman’s Jeanne Dielman: a rigorous chronical of visual storytelling.

On the other hand it is no co-incidence that the iconic British director has found countless imitators over the years: ‘Hitchcockian’ is now a commonplace adjective in film parlance. Meanwhile Akerman’s disciples – Kelly Reinhardt and Gus van Sant – are still grafting away at the coalface of arthouse film; celebrated by cineastes, but certainly not the mainstream.

Chantal Anne Akerman was born Brussels in 1950 to the holocaust survivor Natalia (Nelly) Akerman, whose family perished in a concentration camp. Chantal had a sister, Sylvaine, but Nelly would be her guiding light, encouraging Chantal to forge her own career rather than marrying young, as her mother had done. But Chantal still saw life from her mother’s perspective, despite a radical relationship with Sonja Wieder-Atherton, and a job as a university lecturer in New York. Akerman’s final feature No Home Movie (2015) captures Nelly’s final months. Akerman would take her own life the same year, in Paris.

Jean Dielman was shot in five weeks with a modest grant from the Belgium government of around 20,000 euros (in today’s money). Anchored by a luminous performance from Delphine Seyrig, one of the day’s foremost film stars in France and Belgium, Seyrig was also one of the first feminist filmmakers whose Be Pretty and Shut Up (Sois belle et tais toi) 1981 ruffled quite a few feathers in the male-dominated French-speaking cinema world at the time. Seyrig carries the feature, haunting every frame with her elegant obduracy. She is fragile – yet always capable and in charge – until blind-sided by an event she had never anticipated.

Jeanne Dielman lives a modest existence with her teenage son Sylvain (Decorte) in a tiny flat in Brussels. A widow trying to keep up appearances on reduced circumstances, she leaves nothing to chance. Daily-life plays out in a repetitive timetable over the course of three days. The relationship with her son could best be described as detached, the closest they ever get to closeness is when competing for the most accurate pronunciation of a word from his Flemish-speaking school. Even a letter from her sister in Canada is viewed with formality rather than sibling affection, and this style sets the tone for the rest of the film.

Incessant washing, cleaning and cooking form the basis for the meticulous monotony of Jeanne’s daily life. And there’s a comfort in the quotidian, punctuated by brief errands, or to replenish the larder. Whenever Jeanne leaves a room, she switches off the light. Relief comes as a poisoned chalice when her neighbour’s baby arrives in a portable cot, driving her to distraction with its endless mewling, all beyond her control. The afternoon sees Jeanne receiving clients (Storck, Doniol-Valcroze, Bical), who pay for her bedroom services, and keep the wolf from the door. 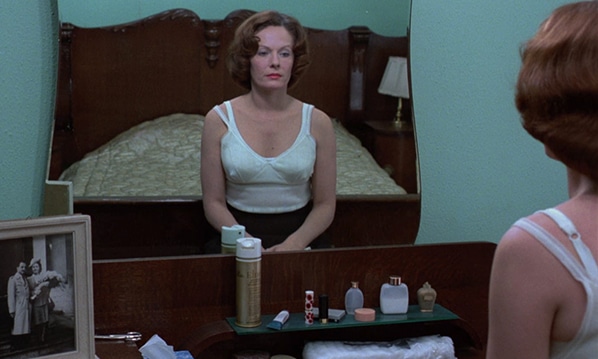 The first signs of mental disorder erupt in highly controlled emotional meltdown over an incident involving potatoes. Jeanne then forgets to put the lid on the tureen, a hiding place for her hard-earned cash, and is afterwards seen frantically going round the shops in search of a button missing from a coat. The following day will see Jeanne pushed to the limits, the formal minimalism morphing into a melodrama that is implied but never shown. Under a mantle of discrete ecstasy Jeanne’s world spins out of control when a client dares to threaten her stability, challenging her control and exposing feelings that can be never be realised or properly acknowledged in her life of emotional asceticism.

DoP Babette Mangolte shoots in colour but her images owe much more to black and white. Jeanne is always in charge, and always busily involved in a world of repetitive housekeeping. Her casual outings take us into a world of stasis – the roads and pavements bereft of movement, make Jeanne happy, because they submit to her orderly sense of self. At the end she is almost catatonic, and somehow purged of her inner angst, for a while at least. Akerman’s triumphant study of displacement activity is almost a horror story, a psychological thriller that sees Jeanne forced to keep herself engaged in a mindless, male-enforced rigorous ritual to avoid a loss of control and its contingent breakdown that would expose the gaping emotional void in her life.

BFI will screen JEANNE DIELMAN as part of the full 100 Greatest Films of All Times in JANUARY, FEBRUARY and MARCH 2023.