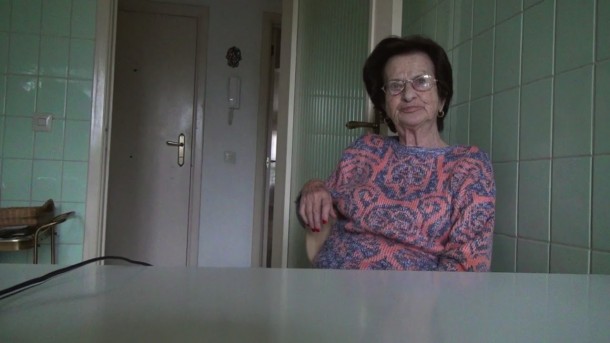 The last film of avant-garde director Chantal Akerman (1950-2015) is a still life of her mother Natalie, survivor of Auschwitz, who occupied her flat in Brussels. It is the final filmic account of Natalie Akerman, by a daughter whose life (and work) she completely dominated, unintentionally yet inevitably, until her death in 2014. Chantal Akerman committed suicide the following year.

Chantal Akerman’s obsession with her mother is the topic of News from Home (1977), a work show entitled My Family and other dark Materials, and Letters Home (1986), about the visceral link between the poet Sylvia Plath and her mother Aurelia; who described Sylvia’s struggle with her Jewish identity before her own suicide in 1963. And, as Akerman once said in an interview, “my mother is Jeanne Dielman”, the heroine of the director’s most famous work of the same title: “My mother making her home into a jail”. In common with all children of Holocaust survivors, Chantal Akerman’s life was formed by the Shoah. Her mother Natalie had fled Poland in 1938 to Belgium, but was deported by the Germans in 1943 to Auschwitz, not 30 miles away from the place she grew up near Kracow. Returning to her husband in Brussels, the rest of her family having been murdered, Natalie gave birth to two daughters, Chantal and Sylviane, who also features in NO HOME MOVIE. Without a formal education, Natalie became a prisoner in her own flat, while Chantal lived a peripatetic existence, filmmaking and making her home everywhere, yet nowhere.

After watching a screening of one of her daughter’s films, Natalie commented: “You have all this, I only have Auschwitz”. There is no way a child can have a remotely satisfying relationship with a mother like this. Akerman opined to her fellow Belgian filmmaker Marianne Lambert “I don’t belong anywhere, yet my mother is the centre of my oeuvre”. And yet her Jewish roots would always catch up with her wherever she travelled, rather like the Jewish joke about the man called Katzmann (Catman) from Paris, who wanted a less Jewish name – his friend translated Cat into ‘Chat’, man into ‘l’homme’, finally calling him Shalom.

NO HOME MOVIE, a medium between essay and documentary, is a final attempt by Akerman to come to terms with her mother’s history, and to make peace with a woman whose total apathy in terms of feminist emancipation must have made her feel desperate at times, even though she inspired, or better, counter-inspired, her to make all these films. Using consumer grade digital camera (and Skype), NO HOME MOVIE is very different from many of Chantal Akerman’s ‘formal’ films, being her own DOP underlines the concept: but she has chosen this personal medium to show a relentless private world. And the private world and the director’s world come full circle, when her mother goes into an endless monologue about how to cook potatoes, evoking the potato peeling ritual of Jeanne Dielman. But other topics are also sensitive: the war, anti-Semitism and the double bind her parents put her into as a young girl: Her father wanted her to be slim so she would find a husband; her mother fed her constantly, to make up for her own near-starvation. To watch NO HOME MOVIE requires patient tolerance; it only leaves the confines of the flat/jail for two long shots of desert grass in Israel – apart from this, it is a ‘Trauerarbeit’ about a mother and two daughters. Cut from over twenty hours of original footage (“if I had tried to make a film about my mother, I might not have dared”), NO HOME MOVIE is a still life, where events unfold out-of-frame: when we leave her mother’s graveside, what happened the following year seems somehow a logical conclusion. AS

NO HOME MOVIE IS ON RELEASE AT SELECTED ARTHOUSE CINEMAS