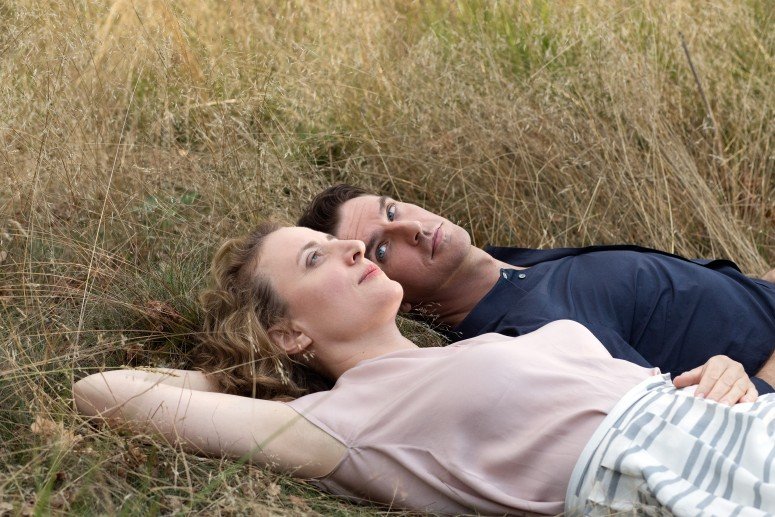 Slick, sophisticated and satisfying this dating movie with a difference sees things from a distinctly female perspective exploring love and desire in a scenario may remind you of another recent German comedy Toni Erdmann which also starred Sandra Huller as a put-upon professional. Here Maren Eggert plays a similar character, a hard-working scientist at the famous Pergamon Museum in Berlin, struggling to care for her dementia-ridden dad (Hubsch). She accepts an invitation to participate in an extraordinary experiment that will fund her research. For three weeks, she is to live with a humanoid robot. And this is where Dan Stevens comes in as ‘Tom’ a dating machine in human form, with the intention of fulfilling her dreams. But although Tom’s artificial intelligence has been designed to allow it to morph into the man of Alma’s dreams, sadly it is on the spectrum feelings-wise, unable to appreciate human emotion, forcing the couple to seek professional help, from a relationship counsellor in the shape of Sandra Huller.

Maria Schrader, who won a Silver Bear for acting and is the director behind breakout TV mini series Unorthodox and award-winning biopic drama about Austrian novelist Stefan Zweig, directs with supreme confidence adapting her script from a book by Emma Braslavsky, and adding a suggestive cinematic spin to her intuitive grasp of the subtle dynamics of love and dating, and the chemistry behind acting, in a film that reflects the reality that love relies just as much on the lows as the as the highs to be emotionally fulfilling for the human psyche. Maren Eggert is superb as the thinking woman’s love interest in a performance that is fraught with emotion as well as thoughtful dignity, never resorting to histrionics or melodrama. Benedict Neuenfels makes this a pleasure to look at with his lush summery landscapes of Germany and Denmark.

But the film belongs to Dan Stevens who gives a nuanced performance in a difficult role as a robot that teeters between the ideal emotionally intelligent man and a geeky robotic guy you may even and have dated yourself and eventually grown to love – and even fancy – for his truly masculine take on life. I’m Your Man shows a bright future, where women (and men!) can get what they really want. But do they really know what it is? MT