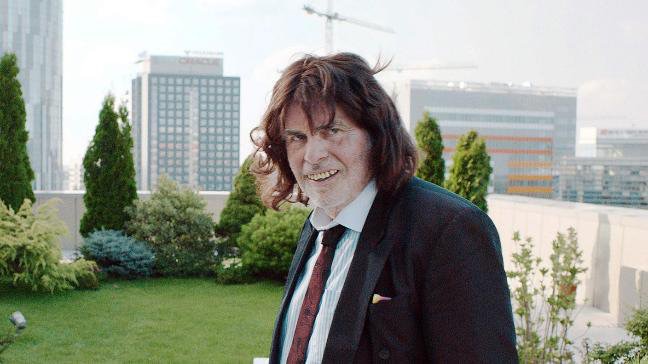 This quirky and hilarious satire from German  filmmaker Maren Ade is a European arthouse  classic that celebrates the intergenerational gap with humour rather than strife.

Maren Ade explores whether comedy is the right way to fix family issues – or whether we should just try to be more sympathetic and understanding. In a film that runs just short of three hours, she achieves a blend of situational comedy, embarrassing incidents, pervy sex scenes and even a good old German nudist party in the style of Ulrich Seidl or even Aki Kaurismaki .

TONI ERDMANN‘s hero is Austrian: Peter Simonichek plays Winifried, a divorced music teacher who loves playing inappropriate practical jokes on his friends but his latest pranks involve his adult daughter Ines  (Sandra Hüller). We first meet Winifried in the throes of arranging a surprise musical tribute to an old colleague’s retirement. But not everyone likes surprises or to be part of this harmless fun, least of all his serious-minded daughter who has to be at the top of her game as management consultant in the competitive macho world of Romania. When she realises her father has been up to his tricks in a bid to poke fun at her childless state and perceived loneliness, it’s already too late to block his impromptu visit in Bucharest, after the death of his dog Willi leaves him footloose and a bit down in the dumps.

As a little girl she loved his tomfoolery, but his casual arrival at her offices in fancy dress, makes her extremely irritated. Rejecting his bid to offer fatherly appreciation, Winifried then starts to behave like a stalker, popping up at Ines’ dinner dates pretending to be his alter ego ‘Toni Erdmann’ complete with wig and grotesque false teeth which he claims are from cosmetic dentistry “I wanted something different – fiercer”.

Only a woman can appreciate the intricacies of life in the competitive corporate world where women are supposed to “go on shopping trips” when they travel with their CEO husbands. Rather than hanging with the guys after work, poor Ines is forced to show the women round the shops while the men ‘kick back’ over drinks. Extremely galling. At one point she tells her boss “if I was a feminist, I wouldn’t tolerate guys like you”. Ade’s script is really spot on, brilliantly manipulating this father daughter relationship and drawing some subtle and intricately-played performances from Simonischek and Huller, who start as polar opposites in their frosty stand-off but gradually grow more sympathetic and human during the course of the film. Beneath Winifried’s silliness lies a heart of gold, he appreciates the real world but has withdrawn from it to reflect  and his daughter emerges to be far more caring and worldly than he gives her credit for.

Winifried’s old dog Willi sets the furry leitmotive for rest of the film, and he pops up in various shaggy wigs and even a full blown Bulgarian scarecrow outfit. The irony comes from the way Ines intuitively manages her difficult colleagues and local friends; her secretary Anca is the only sympathetic female character and there are some really poignant scenes at the end where Ines and her father finally let their guards down to acknowledge that blood really is thicker than water. MT

NOW ON MUBI  | WINNER OF THE FIPRESCI AWARD CANNES 2016