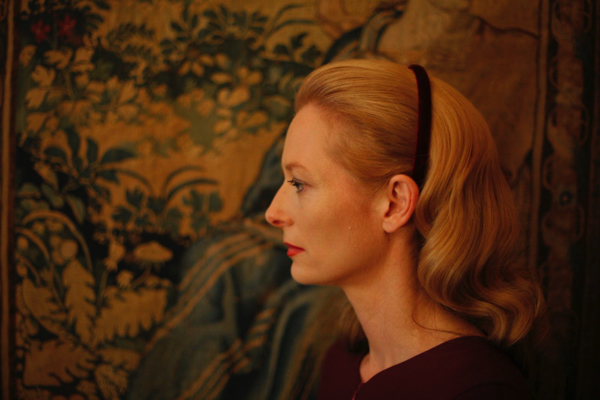 Tilda Swinton is the graceful and luminous presence who lights up this sexually ambitious  drama about a woman whose sterile existence comes to life when she falls in love.

She plays an ice cool aristocratic-looking Russian who assumes a dignified role as the doyenne in the wealthy moneyed household of her Italian husband Tancredi Recchi. Their austere 1930s mansion is surrounded by formal gardens and staffed by a legion of white-aproned maids and black-coated butlers. But she is about as satisfied as Silvana Magnani in Pasolini’s Theorem, or Lucia Bose in Antonioni’s Cronaca di Un Amore, although a good deal more wealthy.

The rich and powerful Recchi dynasty is well-established, like a tight-lipped Northern Italian version of the Corleone’s without the Mafia connection – or at least there is no allusion to that here. And Emma is tasked with organising a birthday dinner for her father in law (Gabriele Ferzetti) who informs them all during the afternoon that follows the expansive banquet that he has decided to hand over the reigns of the family business to Emma’s husband and her younger son Edo (Flavio Parenti).

There is plenty to enjoy here even if the ensuing love story or business wranglings fail to ignite your imagination. And fortunately Emma’s lover (Antonio Biscaglia) is a more sensible choice than Mangani’s dalliance with The Visitor in the shape of Terence Stamp in Theorem. There have been many Spring/Autumn affairs in the history of film and this one is delicately handled by Swinton who appears to share her sentimental feelings with her son Edo, although the Lesbian liaison of her art student daughter (a perfectly cast Alba Rohrwacher) seems a bit contrived and less convincing. When love blossoms for Emma the dour Milanese winter scenes are abandoned for a sun-filled sojourn on Liguria’s coastline, at least for a while and everything glows in Yorick La Saux’s sumptuous visuals which won him awards for Best Cinematography two years later. Antonella Cannorozzi does her stuff exquisitely in the costume department, although the Oscar went to Colleen Atwood for Alice in Wonderland (2010). The only bum note is the inappropriate score.

But dark clouds gather on this brief-lived idll and ugliness is soon exposed behind the facade of elegance and respectability. Just goes to show what glisters isn’t always gold. MT