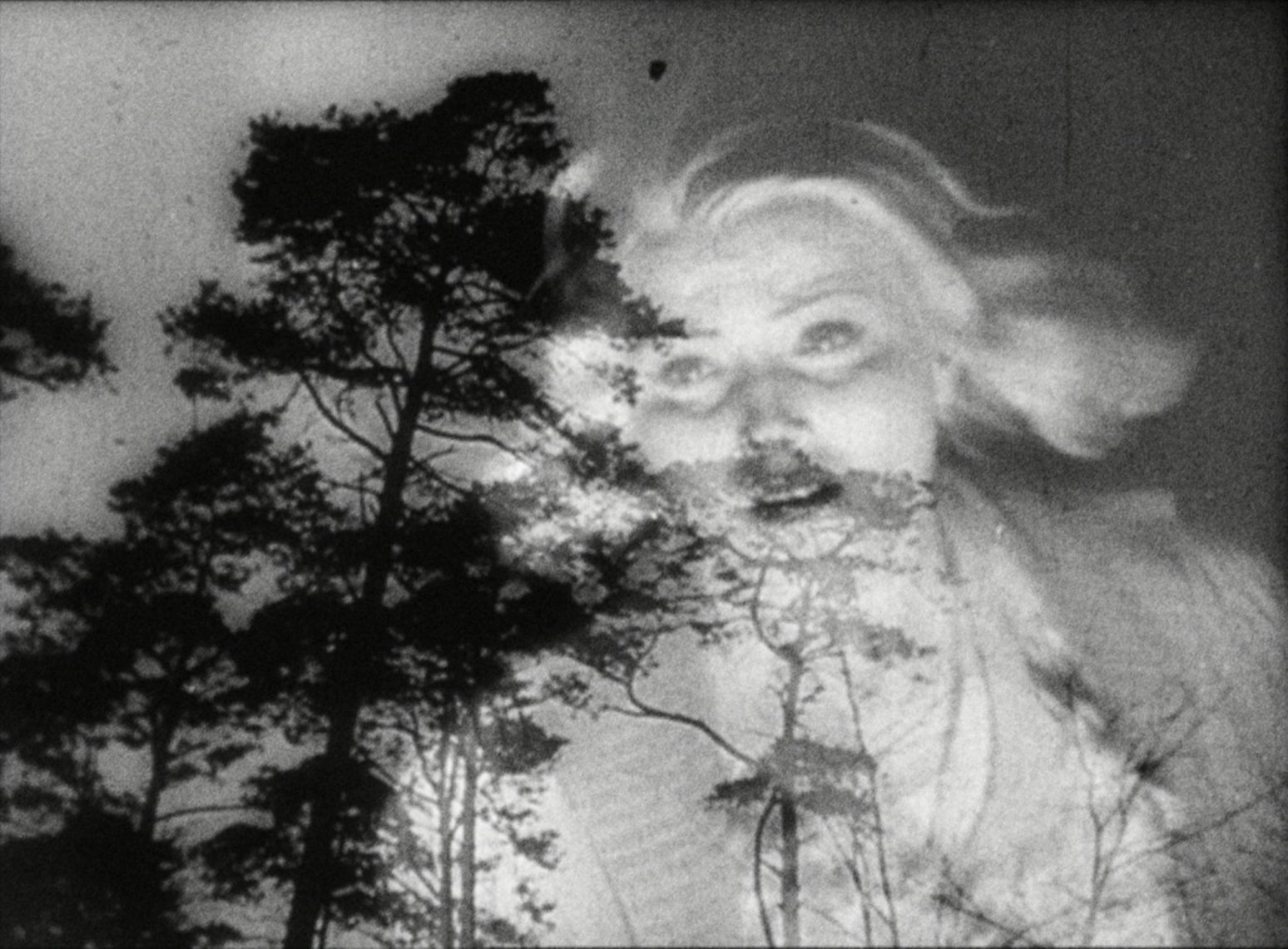 Rüdiger Suchsland follows his brilliant From Caligari to Hitler with a chronicle of  cinema during the Nazi regime, 1933-1945. The Nazis may not have achieved their thousand year reign, but they produced roughly this number of feature films. Hitler’s Hollywood is narrated by the softly sinister voice Udo Kier, with quotes from from Hannah Arendt and Susan Sontag, Suchsland searches the souls and minds of ordinary German citizens who went the cinema in record numbers, the like of which would never be seen again.

Of these features, roughly 500 were comedies, over three hundred belonged to the popular genre of “Revue” films, the rest was made up by detective and adventure films. There were no Horror movies (enough in real life), and just one SF movie: GOLD by Karl Hartl, a shameless Metropolis rip-off, with its star Brigitte Helm now able to talk. The huge majority of features were produced by the UFA, founded in 1917; its owner, Von Hugenberg, had helped Hitler to achieve power. In 1937 the company was nationalised, and in 1942 monopolised every film production. There were no auteurs in Nazi cinema (they had mostly emigrated like Fritz Lang), the stars had much more power, given to them by Dr. Joseph Goebbels, Reach’s Propaganda Minister, who was THE auteur: controlling everything from script, auditioning to censorship.

Not that Goebbels had to change that much: On the last day of January 1933, after being installed as Chancellor, Hitler visited the Berlin premiere of Gustav Ucicky’s MORGENROT. This U-boat feature showed what was in store for Germany: the love of death. The commander declares “that Germans might not be good at living, but are pretty well prepared to die in style”. More about this later. MORGENROT was one of about 40 hard-core propaganda films. But the Nazi ideology was very much present in all productions. Jews were the most popular target of these agitation films (DER EWIGE JUDE, JUD SUSS, DIE ROTHSCHILDS). The British did featured in OHM KRUGER, but the majority of these outings were either glorifications of dead Nazi heroes, or of their fictional characters. There was HANS WESTMAR, HITLER JUNGE QUEX, SA MANN BRANDT as well as war features. These largely fell into two categories: the ‘victory’ celebrations depicted in SIEG IM WESTEN, STUKAS, U-BOOTE WESTWARTS or the ‘Durchhaltefilme’ (perseverance films) which came towards the end of the Second World War. One of the most prominent of these was Veit Harlan’s 1945 action drama KOLBERG. This was one of the most expensive German productions to date, a mammoth undertaking that saw 100, 000 soldiers taking part in the bellicose spectacle. There was even a Pro-Euthanasia feature ICH KLAGE AN, directed by Wolfgang Liebeneiner. It came as no accident that Goebbels chose Harlan to helm this extravaganza. “Fascist ideology was part part of his whole work” – and he was by far the most talented filmmaker of the Nazi period – and the most prolific – with twenty films in just ten years. Harlan cast his wife Kristina Söderbaum to star in nearly all his films: she usually committed suicide by drowning, as in THE GOLDEN CITY DIE GOLDENE STADT (1942), and THE GREAT SACRIFICE (1944)). And it goes without saying that both continued their careers well past 1945 in West Germany. Ferdinand Marian, the most gifted actor of the period, who played the wicked Jew in Jud Süss, was killed while drunk driving in August 1946 – some days before a tribunal would decide his professional fate. 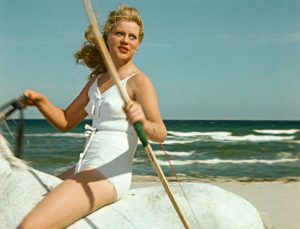 Kristina Söderbaum was Swedish along with several of her compatriots such as Zarah Leander (LA HABANERA) and Ingrid Bergman who appeared in Carl Froelich’s 1938 romantic drama DIE VIER GESELLEN.  Then there was the Czech actor Lida Baarova  – Goebbels nearly left his wife for her – and star of DIE FLEDERMAUS (1937); the Dutch stars Johannes Heesters in FRAU IM BESTEN MANNESALTER (1959) and Ilse Werner in WIR MACHEN MUSIK (1942) . They were required to visit a police station every week to renew visas. But the brightest star in this firmament was the Hungarian actor Marika Rökk (KORA TERRY, IT WAS A GAY BALL NIGHT 1940), who sang and pirouetted her way through 19 features of the Nazi period, and nearly as many in post-war West Germany.

A special mention should go to the Gustaf Gründgens as the leading turn in Hans Steinhoff’s TANZ AUF DEM VULKAN 1938, and Helmut Käutner romantic drama AUF WIEDERSEHEN, FRANZISKA! (1941).  Gründgens esteemed by Göring, but hated by Goebbels. With his androgynous looks (and muddled sexual orientation), he sang “the night is not only there for sleeping” in the 1938 drama. It was an open invitation to revolt, and Goebbels reacted by letting the film pass, but the recording of the film’s score was never released. There is some irony in this feature where city dwellers throw resistance flyers from their balconies – and in real life, the Scholl siblings were beheaded a few years later for doing exactly that in their High School. Suchsland lets Käutner get away lightly, calling him “a man with an anti-fascist soul”. After the war, Käutner directed less ironic mainstream features, now too timid to upset anybody.

Hitler and Goebbels both were film fans even before coming to power. The Leader preferred Micky Mouse cartoons and Frank Capra films, Goebbels was an admirer of early Eisenstein features. Both had it in mind to create a German Hollywood, dominated by dramatic gestures and crowd scenes. An early example of this was Leni Riefenstahl’s 1935 chronicle of the Nazi Party’s Nuremberg meeting: THE TRIUMPH OF THE WILL (TRIUMPH DES WILLENS). It is like a religious service, an ornament of masses, constantly synchronised movements. In contrast to these epics, her Olympia films were a search for the perfect body. But what is lacking in most films of this era is irony, even the screw-ball comedies, modelled on Hollywood, lacked this essential ingredience. 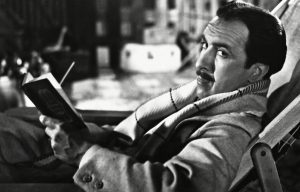 Later reality and feature films moved even closer: DER GROSSE KÖNIG (Veit Harlan 1942) was premiered in parallel with USSR invasion. Male leader figures like Frederick the Great and Frederick I often featured, such as the hero portraits of Schiller, Schlüter and PARACELSUS (GW Pabst, 1943). During the war years, the newsreels lasted on average forty minutes.

The other side of these strict political agitprops were the comedies with their regressive characters; and Suchsland starts with a clip from THE MAN WHO WAS SHERLOCK HOLMES (Karl Hartl 1937). It shows the two best known male stars, Hans Albers and Rühmann (the latter a German Everyman, who was extremely popular during the 3rd Reich and in West Germany) playing around like little boys, enjoying their bath and using the foam to have fun in their separate bath rooms. Whilst Albers was usually the hero (THE BLUE ANGEL, PEER GYNT, GOLD) Rühmann (MODEL HUSBAND, HEINZ IM MOND) was the scatter-brained dreamer, who just got along, but usually came out on top.

And while the Nazis seemed to love their nighttime marches armed with torchlights in the dark, creating a sinister atmosphere of necrophilia, they loved death even more. There is a great montage in Suchsland’s documentary that shows the mountain of deaths that accumulated during these twelve years: nearly everyone seems happy to die, including the victims of Euthanasia.

Last, but not least, we should mention WUNSCHKONZERT (Eduard von Borsody, 1940) an impressive amalgamation of feature and newsreel. Kicking off with the Olympics of 1936 and ending with the Fascist victory in the Spanish war, this relationship drama starring Ilse Werner and Carl Raddatz is best described by the couple listening to the chorus, who sing: “I know there will be a miracle, and a thousand dreams will come true”.  Meanwhile, the cinema audience was increasingly inured to endless sacrifice (turning a blind eye to murder), they were asked not to trust what they saw, but to “believe in their intuition that all will turn out well”. Germans, so Suchsland, did not want to leave the cinema, because the reality was too cruel.

We can look forward to Suchsland’s next project, an analysis of post-war West German cinema, which will showcase the era of the Weimar Republic and the 3rd Reich. AS