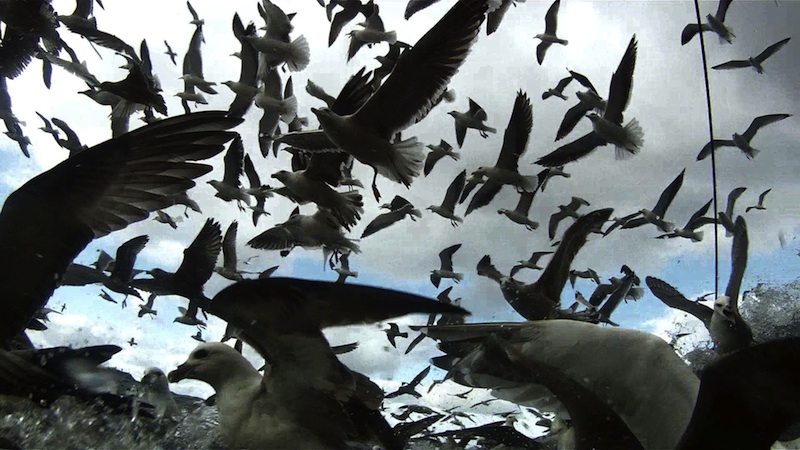 Visceral and frightening: Watching LEVIATHAN feels like witnessing some kind of public execution – for fish. Bleak but also beautiful in parts, this debut documentary from Canadian helmets Lucien Castaing Taylor and Verena Paravel evokes the vast and terrifying world of the deep-sea commercial fishing industry, from the perspective of the victims – fish.  Submerged in darkness with a clanging, mechanical score and the distant sound of voices, gradually in the gloom the camera pans over the deck on board a gigantic trawler where shoals of fish are sucked into their deaths in a gigantic steel slaughterhouse of the trawlers and spat out again into their watery graves by some anonymous force, if they’re not suitable for the the insatiable mouths of a mammoth human predator.

Face to face with floundering fish, molluscs and the watery blood of slaughter, their camera takes no prisoners or feels no pity for the fate of these poor creatures. Exhilterating and horrifying in equal measure, the fear of execution becomes palpable  (although thankfully not to us as we are swept along mercilessly in this cruel sea of shameless killing spree.  Fast-moving and fickle, we watch helpless as fish are gored and gutted and spewed out in a hellish brew of blooded scales and staring eyes.

The diurnal battle rages but by the end even the fishermen are exhausted by their fresh-air and ozone overload, gently nodding off in the warmth of the hold, preparing for the next onslaught.  This is a job, like any other for them. But for the animals, from whose perspective the camera fight in an unfair war MT

LEVIATHAN was shot in North Atlantic.  The doc is on general release from 29 November 2013 nationwide.