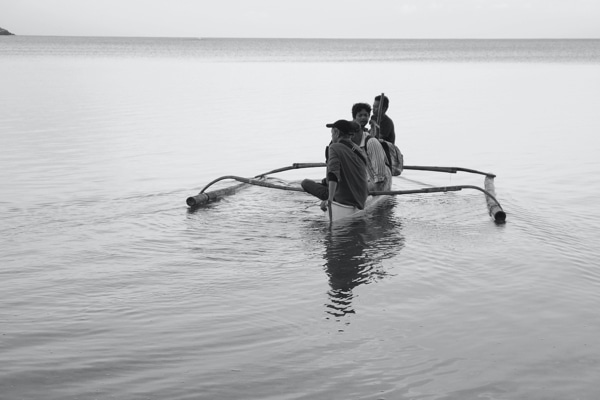 Philippine filmmaker Lav Diaz (*1958) is known for his valuable contribution to the “Slow Cinema” Movement with features often lasting between 225 minutes (his 2016 Venice winner The Woman Who Left) and roughly eleven hours (Evolution of a Filipino Family (2004). His most popular film Norte – or the End of History (2013), a re-working of Dostoyevsky’s Crime and Punishment, coming in with a middling 250 minutes.

So it is quite remarkable that Genus Pan lasts a mere 150 minutes – truly a short film project for Diaz, who for the first time found international producers for his Locarno 2020 project When the Waves are Gone, a Dumas re-setting of the Count of Monte Christo, interrupted by the Covid19 pandemic.

Genus Pan is set on the island of Hugaw, known as ‘dirt island’ because of its history. During the Japanese occupation (one of many colonial powers who have invaded the Philippines) Japanese soldiers kidnapped and raped indigenous women, using them as sex slaves. Today the Vargas family rules the island with help of a para-military army, led by the Captain (Popo Diaz, who acts as PD).

The story follows a trio of miners, the young Andres (Boongaling) and the older Baldo (Josef) and ex-circus worker Paulo (Guingona), who have decided to seek work on the pier of the nearby city. Their journey across the jungle is an eventful one fraught with memories of their time at the Circus, Andres being angry with Baldo for taking a “placement fee” from the younger man, as did the exploitative bosses and soldiers back at the mine. Paulo, a devout Christian believer, smooths things over by paying Baldo the fee so he can give the money to Andres who needs it for his sister’s medical treatment. Under the influence of alcohol, the old men remember how they murdered the ‘Clown’, before killing each other. Meanwhile Andres blacks out.

Without revealing the entire plot suffice to say this is a another colourful human story involving murder and mayhem in a tight-knit community of divided loyalties and fierce family allegiances, the colonial past colliding with future hopes and dreams.

Once again the themes of Diaz’ work resurface retracing his homeland’s fractured history, the present still caught up with the repressive regime of President Marcos and today’s President Duterte. Strong mysticism also plays its part particularly in rural areas, adding a vibrant spirituality shaped by the Catholic faith and the Easter processions with traditional  rituals of self-flagellation and dedication to the Virgin Mary.

But Diaz’ overriding strength is his potent visual aesthetic that helps us to live in the film and be completely enveloped by the experience. There are no dramatic arcs: Diaz’ films mimic life itself: there are no chapters or “artificial new beginnings”, everything flows on as a unit. A scene often begins with an empty frame showing the opulence of the jungle where Diaz’ characters will live out their experiences. Leaves flutter in the wind, clouds wander, and water ripples by. “I am trying to unify space and time” he says. The audience joins the protagonists in a daily experience that mirrors their own Cinema is “an engagement with life” for Diaz, just as it was for Tarkovsky, who is quoted: “Time becomes tangible when you sense something significant, truthful, going on beyond the events on the screen; when you realise, quite consciously, that what you see in the frame is not limited by its visual depiction, but is a pointer to something stretching out beyond the frame and to infinity, a point to life”.

Diaz’ cinema follows the flow of dreams and ideas. It takes us back to our childhood reflecting loss, joy, remorse and the harshness of everyday life. We can find a new home for our memories in his flowing images. AS