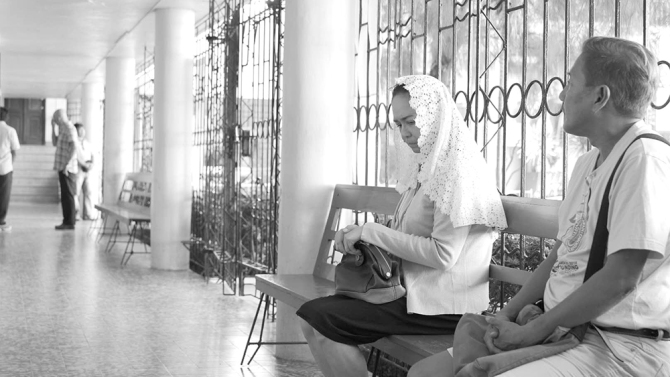 After winning the Berlinale Silver Bear in February for his eight hour epic A Lullaby to the Sorrowful Mystery, Philippine maximalist Lav Diaz – as usual – directed, photographed, wrote and edited The Woman who Left, a revenge drama (running a mere 226 minutes), for which he was awarded the Golden Lion at the Venice Film Festival this September. Venice was where he rose to international fame, winning in the Horizon section for his seven and half hour long Melancholia (2008), a psychological drama about Philippine resistance fighters coming to terms with their defeat. The past and present of this war torn and utterly poor country, being the subject of nearly all Diaz’ films.

Horacia (Santos-Concio), a teacher, has been in prison for a murder she did not commit. We meet her first in jail, working the fields, and afterwards teaching some of her inmates reading and writing. After thirty years, she has given up any hope of a release, but out of the blue, her best friend Petra (S. Buencamino) confesses she was the culprit, having been paid by Rodrigo Trinidad (de Mesa) to frame Horacia. It seems Rodrigo wanted to punish his former lover for marrying another man. On the same day Horacia leaves prison, Petra commits suicide. After meeting her daughter Minerva, now thirty-seven, Horacia learns, that her husband has died and her son is missing. She starts leading a double life: during the day she organises the poor neighbourhood, setting up a restaurant, and teaching the children and young adults. At night, she turns into an angel of revenge, plotting to kill Rodrigo, a gangster who is living in a heavily guarded community. In the dark streets she meets the snack vendor Magbabalot (N. Buencamino) and another homeless man, Mameng (Jean Judith Javier), and finds out that Rodrigo goes every morning at five to the cathedral to pray. We watch Rodrigo, trying to confess to the priest, but he is just too proud and wicked to really repent. Horacia also takes care of the transvestite Hollandia (John Lloyd Cuz), a prostitute, who is beaten up. For the first time, Horacia opens up, telling Hollandia she was on the way to kill Rodrigo, when she found him injured in the gutter. She is unaware of the consequences this confession has, and we see her last in the fog and mist of Manila, distributing leaflets, looking for her son.

The Woman Who Left is shot in the typical Diaz way: low key black and white, with high contrast lighting. It often feels like one is watching a silent film such as Metropolis, early Eisenstein works or the first part of Mark Donskoy’s Gorky trilogy My Childhood. When Horacia walks the nightly streets, she reminds us of Murnau’s phantom. The glacial pacing contributes to a nightmarish atmosphere, the blackest of noir. Horacia uses different names for herself, indicating that her personality is splitting. We see the shadow world she moves in, out of her POV: the focus is blurring, particularly at a scene at the beach, when handheld camera images get more and more out of focus. In common with many Diaz films, the past takes over the present, destroying the main protagonist’s identity.

Making her first screen appearance for over eight years after resigning as CEO of ABS-CBS Broadcasting Corporation, Charo Santos-Concio is brilliant in the title role. Dignified, but increasingly losing her faculties, she sings to herself more and more, and joins Hollandia for a chorus of “Somewhere” from Westside Story, one of the most touching scenes of this epic journey into darkness.

Whilst the editor in Diaz is still not disciplined enough to cut the favourite images of the DoP Diaz, The Woman who Left is still very restrained, compared for example with A Lullaby. For anyone who has never seen a Diaz film, it is difficult to explain the magnetism his work has: one is literally drawn into his world, lives through the film, the absurd length strangely helping this process of going into a parallel universe. He creates another world, and after leaving the cinema, anything seems simply second best. Diaz’ magic cannot be expressed with words, but when you watch The Woman who Left, you will understand. AS