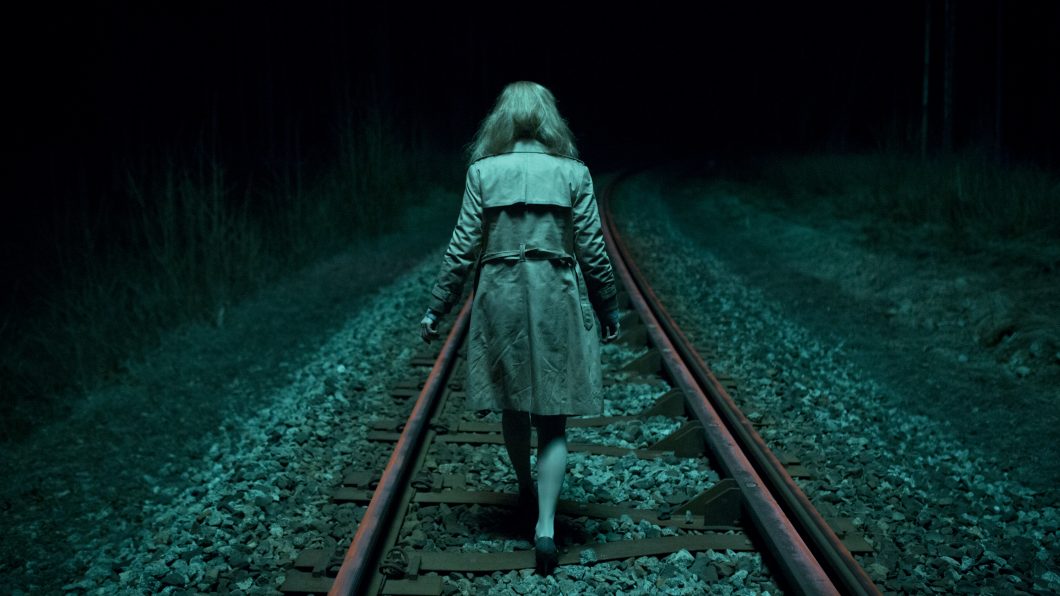 Agnieszka Smoczynska re-unites with DoP Jacub Kijowski and actor Malgorzata Buczkowska who together made The Lure an international success. In Fugue, they are joined by writer Gabriela Muskala, who also  plays the lead role of Kinga, a woman suffering from severe post-traumatic amnesia.

We first meet Kinga staggering onto the platform of a station where she promptly collapses, having urinated infront in full view of the other passengers. Clearly she has lost her mind, and spends the next two years in a psychiatric ward in a Warsaw hospital, where she makes a brief appearance on TV, in the hope that someone might identify her. And they do. She is soon re-united with her husband Krystzof (Simlat) and four-year old son Daniel. Her name is Alicja, but strangely, no one appears happy to have her back, least of all Daniel. The only thing she is sure of is her credit card PIN number she and immediately makes an application for a new Identity Card. Her mysterious family friend Ewa (Buczkowska) is clearly so much more that than this, but Smoczynska keeps her cards close to her chest, revealing little in this enigmatic but captivating mystery drama. Eventually Alicja starts to re-adjust to home life with her husband, but a sudden accident in their car seems to trigger   Alicja’s memory and gradually a whole picture slowly develops of their life before the train incident. It emerges that her husband had successfully divorced her and wanted sole custody of Daniel.

In her follow up to The Lure, Smoczynska offers another convoluted and enigmatic drama: there are moments of supernatural evidence, where Alicja’s home environment appears completely alien to her. Particularly the green bathroom looks eerily like a fish tank (drawing comparisons with The Shining’s Room 237). The country house has a weird and haunted feel to it, and Alicja seems to be a prisoner within its walls, he family and even her son treating her with hostile suspicion.

Fugue is an allegorical story of a woman who is unsure of her position in the world, retreating from motherhood, and drifting between various states of being. Gabriela Muskala gives a brilliant tour de force in the leading role of this unique and beguiling Polish arthouse drama. AS.