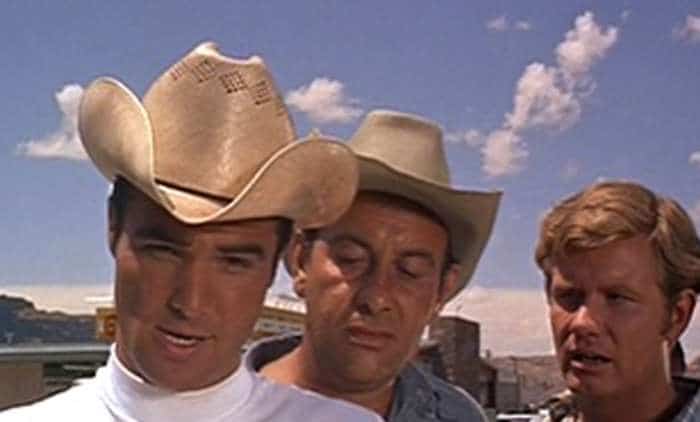 In 1967, Silvio Narizzano was in Moab Utah making a western called Blue with Terence Stamp, Joanna Pettet and Ricardo Montalban

However, the stars also found themselves appearing in Fade-In, with Silvio Narizzano getting a producer credit and Barbara Loden playing a sophisticated movie editor who heads for Mexico to work on a film shoot.

It might be an in-joke that Terence Stamp (starring in the parent production) doesn’t speak for the first forty minutes, yet is the first to say something in this film. Barbara Loden’s eyes, first seen staring intently into a car mirror, are unmistakable, despite this being her only conventional film lead, romanced by local ranch hand Burt Reynolds who has been hired to work as a driver.

The presence over the brow of the hill of the bigger production enabled first time director Alan Smithee to avail himself of the Monument Valley locations and a helicopter suggesting a bigger budget than was actually at his disposal.

The film looks like an imitation of Un Homme et Une Femme and the unique teaming of the star of Deliverance and Smokey and the Bandit with the director and star of Wanda suggest a more estimable achievement than the stubbornly conventional production it insists on being. Richard Chatten