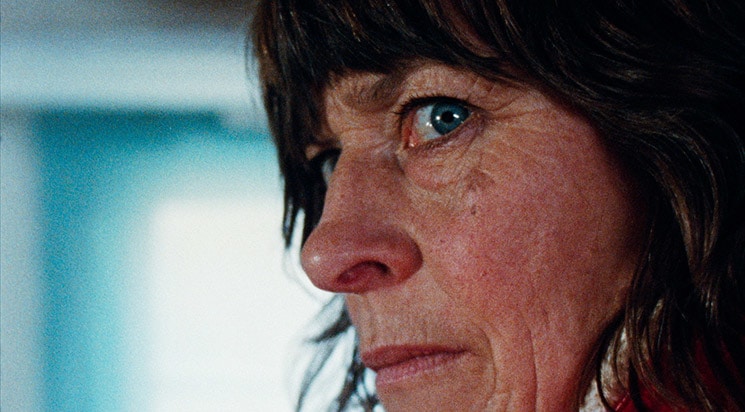 Enys Men is a surreal leap forward for Cornish auteur Mark Jenkin after his striking 2018 debut Bait. Once again we’re back on the Cornish coast with another unorthodox feature and Jenkin taking full control of the artistic process: from directing and writing to creating the soundscape. The setting, a small island off the Cornish coast, plays the lead role in the mystery and we, the audience, join the human cast in groping the way through a maze where a beast is waiting in prey.

Mary Woodvine is the red mackintosh wearing ‘Volunteer’ – a sort of caretaker and biologist. And that red Mac strikes fear into our hearts – a pavlovian response from Nic Roeg’s Don’t Look Now. Mary’s lonely days are spent documenting the genesis of lichen on six experimental flowers with distinctive red stamens. Nightfall sees her tucked up in bed with Edward Goldsmith’s 1972 bestseller “A Blueprint for Survival”.

From her flower diary we know the year is 1973, and the month is April, and the film is drenched in this seventies atmosphere. The colours produced by the 16mm camera reflect the bleached out and grainy look of the era. A radio – Mary’s only contact with the world beyond crackles away, a live wire of conflicting channels zinging with static, just like wirelesses did back then. But this wireless is the only way of communicating with the outside world, apart from sporadic visits from a boatsman (Rowe) who offers provisions and carnal delights for the lady of the house. The forth protagonist, an ecclisastic (J. Woodvine), is straight out of Wicker Man, and, together with the pagan statue on the island, creates a menacing ambiance of mounting dread and expectancy for the plantswoman. Her younger ‘Alter Ego’ (Crowe) occasionally rears  her head to remind us of a history suggestive of violence, and the scar on the woman’s stomach is testament to some kind of past brutality .

All this minimalism brings to mind Bresson, but a certain opaqueness very much echoes Resnais. Repressed love and terror mingle with images of angelic children all dressed in white suggesting some kind of pagan ritual. Enys Men scratches at the edges of horror and the tropes are all there along with the evocative soundscape that signals a change in the emotional atmosphere. The past has taken its victims, and the future is unpredictable. The missing minotaur is always just hiding beyond the next rock, ready to pounce.

ENYS MEN is pure cinema, constantly catching the audience by surprise. As we search for visual clues it soon becomes clear there is nothing to understand in this enigma open to individual interpretation. Although the lack of a concrete conclusion may frustrate many audiences, Enys Men sees Jenkin developing his visual style and language as an unique auteur. AS