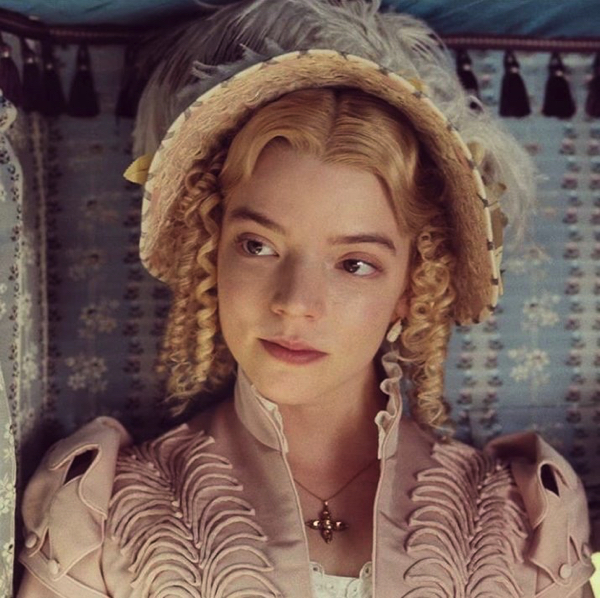 We first meet twenty-one year-old Emma (Taylor-Joy) picking flowers for her ex-governess Miss Taylor (Whelan) on her wedding day to Mr. Weston(Graves). Emma and her hypochondriac father (Nighy) are sad to lose her. Emma – intelligent, beautiful, rich and wilful – turns her attentions to new best friend Harriet Smith (Goth) who is in awe of our accomplished heroine. Emma tells her to reject a proposal from Robert Martin, a prosperous farmer, implying Harriet can do much better. But close confidante George Knightley (Flynn) is not always taken in by Emma’s scheming, despite being in thrall to her charms. Vicar Elton (O’Connor) asks for her hand in marriage and gets a swift kick in the teeth, metaphorically speaking. Frank Churchill (Turner) is a bit of a mystery but comes good in the end, marrying the timid Jane Fairfax (Anderson) who piano and singing skills far outweigh Emma’s.

Cannon’s narrative thrusts the spotlight on Emma, keeping the running time manageable, but rather undercooking the other characters; a device that won’t flummox Austen habitués but may leave newcomers with too many questions unanswered. Anya Taylor-Joy inhabits Miss Woodhouse better than the filmmakers give her credit for, making her far too saccharine: Austen’s acerbic anti-heroine describes her as “only likeable for myself”.


DoP Christopher Blauvelt (Certain Women) conjures up England’s green pleasant land where nature and the characters melt into languid dances of love-sickness, bolstered by a never ending supply of servants. Taylor-Joy sparkles with mischievousness as if the world is her own private kingdom – and male acolytes react accordingly. Flynn’s George is in every way a match for her, but Callum Turner’s Frank pales into insignificance like most of the support cast. Miranda Hart is a perfect Miss Bates in a performance that will linger for a long time. Overall this Emma is good but not great compared to the BBC version. Still a worthwhile celebration of one of our best loved English novels. AS