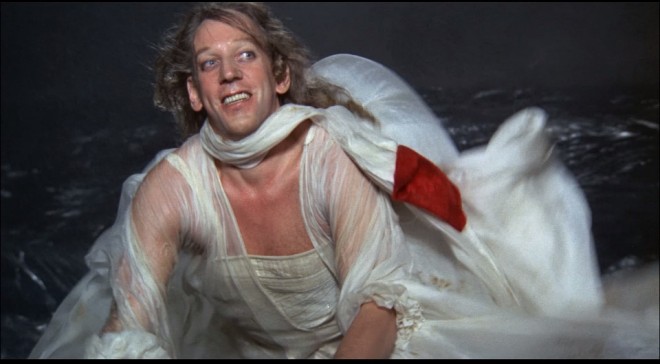 The last years of Casanova’s life are a permanent odyssey through Europe indulging in a variety of amorous but mostly tired adventures. Fellini’s production echoes this emotional ennui. But the film was also an exercise in misery that started with a long search for the leading man: Alberto Sordi, Michael Caine, Jack Nicholson and Gian Maria Volonté were all in line to play the raddled seducer before Donald Sutherland finally got the part. More than one producer gave up and had be replaced. The shoot was suspended between December 1975 and March 1976; on top of everything, some of the  reels were stolen and the scenes had to re-shot.

Sutherland’s Casanova is an old man, a shadow of himself. His role as the Count Von Waldstein’s librarian occupies his days but at night he is hellbent on enforcing his virility at the Venice carnival before he is imprisoned by the inquisition and accused of ‘black magic’. After his flight from the infamous ‘Piombi’ (lead chambers) he travels to Paris, but his stay is short-lived: he finds out that the hostess Marchesa d’Urfe (Browne) is only interested in gaining the secret of eternal life from him. An affair with the young Henrietta (Tina Aumont) causes him to fall into a deep, suicidal depression when the young woman suddenly leaves. After many more affairs, Casanova feels his existence become an ordeal, and ends up dancing with an automated puppet as he is reduced to an object of ridicule by the  servants.

In an interview Fellini is quoted of saying:  “I wanted to realise the total film. I wanted to change the celluloid of film into a painting. If you look at a painting, the effect is total, there are no interruptions. But if you watch a film, the effect is different. In a painting, everything is included, you only have to discover it. But film is just not as complete: The audience does not look at the film, the film allows the audience to look at it, and so the audience becomes the slave to the rhythm of the film, it dictates the tempo. It would be ideal to create a film which has only one sequence. A film in one, great, permanent and varied movement. With Casanova, I would have liked to get closer to this ideal, with Satyricon I nearly reached my goal.” AS

SCREENING AS PART OF THE FELLINI CENTENARY | BFI LONDON 2020