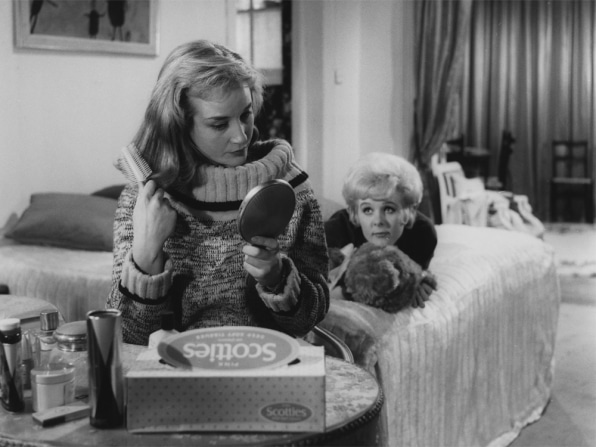 After over fifty years this film has been rescued from near oblivion because the lesbian subtext has led to it being dusted off by the BFI in celebration of sexual diversity. Shot towards the end of the famous winter of ’63 (the snow was gone by then but the Serpentine and The Long Water in Kensington Gardens are visibly still both frozen over), the record it provides of London in those far-off pre-Profumo days gives the film the usual lustre possessed by films from that era.

Despite much emphasis on the sex-crazed mood of its time, the film is really about money rather than passion. Billa (Sylvia Sims) and Ginnie (June Ritchie) are a pair of nightclub ‘hostesses’ wholly dependent for their livelihood on men; and the men in this film are a pretty unlovely bunch. The nearest thing to a conventional romantic relationship depicted is that between Ginnie and Bob Shelbourne (Edward Judd); but he’s portrayed as a weakling whose most attractive quality in Ginnie’s eyes is the enormous fortune owned by his controlling tycoon father.

It becomes pretty clear as the film progresses which side Billa actually bats for from her butch leather overcoat and boots and the high necked pullover she wears when not uniformed for work in cocktail dresses. Her infatuation with Ginnie becomes more and more evident as the film progresses, but ironically she’s the one who gets pregnant. The future doesn’t really seem to hold much chance of Billa settling down for good with a self-absorbed drama queen like Ginnie, whose rejection of men may owe more to her only being interested in those with the money to shower her with gifts than authentic sapphist inclinations. The final scene resolves nothing, although it would be interesting to speculate where they would have been ten years later, or (for that matter, Sims and Ritchie both still being alive and well as I write this) now. @RichardChatten