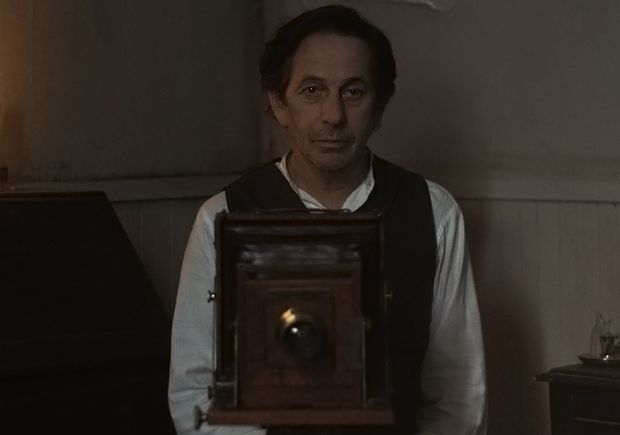 South America’s Tierra del Fuego is the setting for this weirdly compelling drama telling an equally unsettling story against the background of colonialist brutality in late 19th century Chile.

Anchored by a magnetic performance from one of Chile’s leading acting talents Alfredo Castro (Rojo) this is an enigmatic film with suitably ambiguous characters. Castro plays Pedro, a photographer hired by a wealthy landowner to record his impending nuptials. But what starts as a seemingly straightforward gig soon develops into something sinister and otherworld as he finds himself drawn into a nightmarish scenario from which escape seems increasingly unlikely.

In his follow-up to Ocaso Théo Court takes us to the brink with a slow-burning mystery that chases its tale to the point of bewilderment, José Alayón’s striking widescreen cinematography capture the bleak snow-swept landscapes forming a chilling backdrop to this disquieting story  in the remotest corner of the Earth.

After painstakingly setting up his camera to photograph the timid pre-teen bride Sara (Ether Vega) in a series of alluring poses that hint at salaciousness. Pedro is then forced to languish in an isolated cabin awaiting further instructions from Mr Porter, an increasingly evasive employe, who never actually appears. The contrast between this vast wilderness and the claustrophobic interiors and oppressive characters is the crux of this fascinating film which keeps us in suspense until a shocking finale.

Co-scripting with Samuel M. Delgado, Court vaguely hints at arthouse paedophilia in his characterisation of Pedro, a man who has possibly overstepped the mark in his growing obsession for an innocent bride. You could also say he was just an artist keen to do his best in fulfilling his creative brief, but there’s something unsavoury about it all.

White on White makes an uncomfortable watch during these slightly scabrous portrait scenes. Things become even more questionable when Pedro persuades Sara’s governess Aurora (Lola Rubio) to bring the girl for another photo session at dawn. And what follows is worse. From being a respectable outsider, Pedro gradually becomes trapped in this dystopian community of ranchers who have been tasked by the absentee landowner to build an encampment and enslave the Indigenous Selkham people. Pedro eventually finds himself engaged in a more sinister commission, that of immortalising their massacres for posterity at this ‘important time in history’, as Porter describes it.

Although the Selkham people are naturally horrified, Mr Porter believes his civilising influence is somehow an act of heroism. And the final scene contrasts the absurdity of Pedro’s obsession with the compositing his shot with the vile nature of his subject matter. White on White shares a common vein with Lucrecia Martel’s Zama, and there are also echoes of Juaja here in the surreal and scary backwater that refuses to yield its exotic power to the misguided marauders in its midst. MT