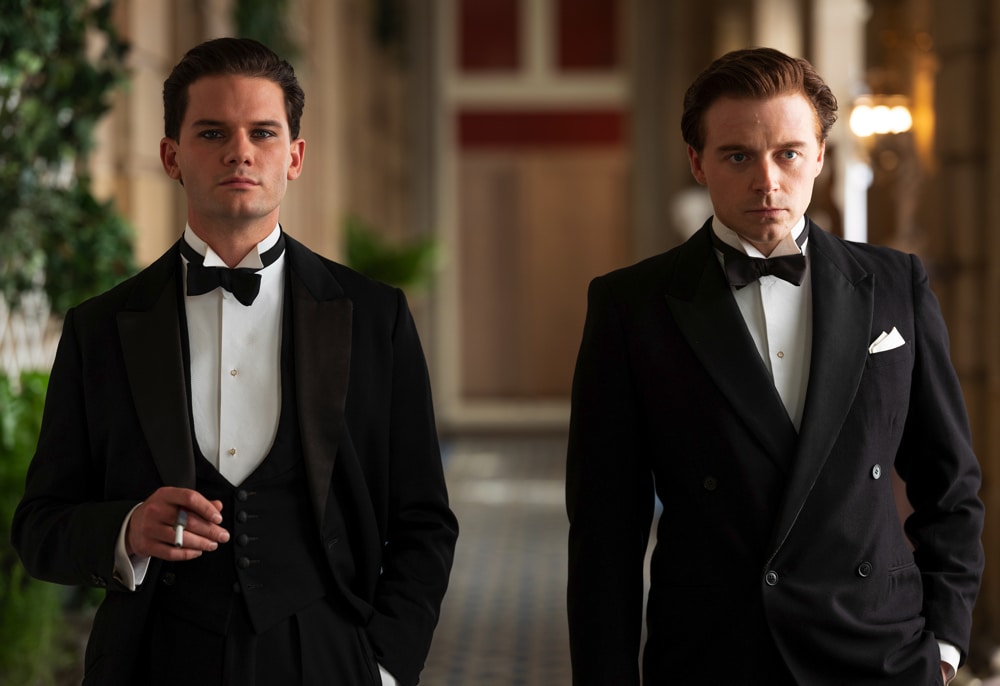 Terence Davies’ portrait of poet and soldier Siegfried Sassoon (1886-1967) is an ambitious if rather theatrical undertaking, with sumptuous scenes playing out in a two act drama rather than a flowing feature, and with a fine cast of British actors. Jack Lowden plays the gentle yet acerbic young poet, Peter Capaldi his bitter, disillusioned older self, more a ghost of his younger incarnation. There stilted aesthetic approach that has crept into Davies work of late is in tune the Emily Dickinson bio-pic A Quiet Passion there are also moments of poignancy,  particularly in the finale, and the archive footage of the war adds depth and context

The story is elegantly fleshed out: Sassoon’s bravery in the trenches, underlined by the archive material; his protest against the political forces’ prolonging the war unnecessarily, manifesting itself in his “Soldiers’ declaration” of 1917, which could have ended in court martial. Influential friend Robbie Ross (a mellow Russell Beale) saves him from the bitter consequences and Sassoon is sent to a psychiatric unit in Scotland, where understanding Dr. Rivers (Ben Daniel) helps the poet to recover. Sassoon also meets poet Wilfrid Owen (Tennison), the two of them bonding in many ways, in a first coup de gourde.

Back at the front, Sassoon is wounded again, and decorated for bravery. London after the Great War is shown in all its decadence, with cameo appearances by Suzanne Bertish as Lady Ottoline Morell, and Lia Williams’ Edith Sitwell (hilarious and one of the highlights). But the main scenes belong to the men in  Sassoon’s life: the cruel and sneering Ivor Novello (Irvine), and other overly narcissistic friends, Stephen Tenant (Lynch) and Glen Byam Shaw (Blyth). And there is Sassoon’s wife Hester Gatty (Phillips), who “has to redeem his life for him” – which is a bit much to ask.

The break into the late 1940s is radical and supported by a lighting change: instead of colourful glitter there is melancholy gloom and the introduction of grown-up son George (Goulding) and the end of the marriage with a mature Hester (Jones), their relationship having broken down years earlier due to age and sexuality incompatibility. Benediction ends on a sombre note with Sassoon converting to Catholicism and a beautiful reading of Wilfred Owen’s “Disabled”.

Bon mots rule – particularly in the 1920s. But somehow the later scenes needed a less glib approach, with a remark about Sassoon’s conversion feeling tasteless: “You can get permanence from dressage, without the guilt”. Geraldine James’ long suffering mother is underused, her relationship with Siegfried never explained, even though she was one of the keys to his troubled existence

DoP Nicola Daley’s camerawork offers a lively first half, when her images re-creating the bohemian atmosphere of the British version of the roaring Twenties. The gloom and doom which follows gives her little room to express herself. Jack Lowden is very convincing – whilst Capaldi is lost with a mono-script which sometimes degenerates into parody. The overly didactic elements of part two will never coalesce with what has gone before. Sassoon, like many of his generation, suffered a sad and thwarted life and Benediction serves as a tribute to the millions that literally lost their lives and their potential, the dead and the living alike. AS