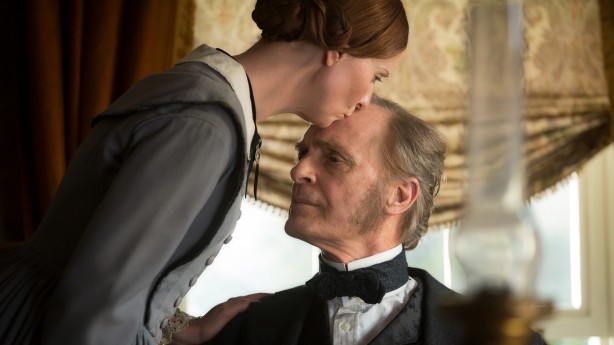 After his sober portrait of Scottish life during wartime, Terence Davies turns his camera back to American life, and particularly that of the reclusive 19th century poet Emily Dickinson, played sensitively here in this illuminating aptly claustrophobic biopic, by Cynthia Nixon. Jennifer Ehle plays Emily’s sister and Keith Carradine her strict but loving Victorian father in an attempt to explore and open up an introspective but hopeful young woman whose poor health saw her gradually regressing into her bedroom as a frustrated spinster. Dickinson had some success at being published at a time when women of her background were considered ill-suited to writing or any other kind of creative pursuit.

Her poetry is sometimes described as elliptical; it is certainly avantgarde but she never blossomed personally or professionally, opting for the closeted atmosphere of her close family rather than one of emotional fulfilment in household of her own. Highly self-critical, Nixon cleverly portrays her own worst enemy, whose inner monologues and negative overthinking continually self-sabotage her success: despite a prodigious output of nearly 2,000 poems, only 11 were published.

Dying from kidney failure at 55, Dickinson endured a maudlin household where, despite Vinnie’s uplifting support and love, the women seemed to teeter perpetually on the bring of anxiety-induced poor health. Her mother can barely get to the end of the day without dissolving into tears of melancholy (often looking like Stanley Baxter in drag).

Shot almost entirely indoors, within the confines of her luxuriously decorated home and flower-filled garden in Amherst, Massachusetts, Davies’ script is suitably coy and wittily crafted; guaranteed to elicit a tittering response of pleasure from its litterary-minded devotees. Played briefly as a young woman by Emma Bell, Dickinson is a sparky and sharp-tongued virago whose pluckiness turns to bitterness in the fullness of time as Dixon takes over the role.

Her God-fearing family is headed by her father who allows her to write at night time and to receive visits from her canny, Dorothy Parker-like friend, Vryling Buffom (Catherine Bailey) who eventually marries. But Emily’s ardour burns only for the unobtainable in the shape of Rev. Wadsworth (Eric Loren). When a good-looking admirer visits one day Emily rebuffs him with vituperative conversation while hiding behind her bedroom door. He never comes again, yet Emily remains desperate to be ravaged by a midnight guest – seen only in profile in a dimly lit fantasy scene. Best known for her antics in Sex and the City, Nixon plays Jane as plain and scathing in contrast to her sister Vinnie’s electrifying smile and brother Austin’s dark good looks.

Terence Davies’ mise en scene is fastidiously crafted as his camera glides stealthily through each shot. Delicate flower arrangement bring freshness to the otherwise crustily powdered and heavily wigged look of the cast whose superb but mannered performances evoke the stiff propriety of the day. A score of appropriate music selections from Schubert to Chopin adds to final touches to this rather twee but beautifully rendered arthouse piece than never quite reaches the emotional heights of House of Mirth or Deep Blue Sea but is nevertheless moving as a portrait of female endeavour and longing.  MT