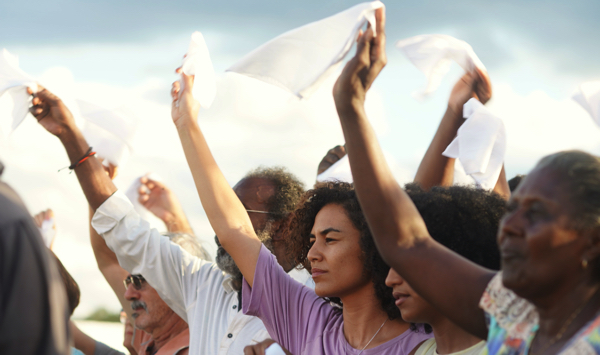 The latest from Neighbouring Sounds and Aquarius director Kleber Mendonca Filho is a dazzlingly inventive Neo-Western that works on three levels: an ethnographical docudrama set in a remote Brazilian village gradually drifts into bandit thriller territory and blows out as a blood-soaked psychodrama showing a caring community capable of standing up for itself.

The action goes on for over two hours involving voodoo, magic realism, flying saucer drones, machetes and plenty of vicious-looking plants bristling in the simmering landscapes of Brazil’s tropical north east. The only thing missing is snakes – but the venom antidote arrives in the village courtesy of recent exile Teresa (Barbara Colen) who has come home to for her late grandmother’s funeral, joined by her soon to be lover Pacote (Thomas Aquino) who turns up trumps in the finale.

Mendonca Filho’s third feature manages its tonal shifts with remarkable ease and conviction and these actually work to the film’s advantage establishing the long-standing personal ties that will make the final act so convincing. And although Bacurau errs on the over languorous side half way through it soon tightens its gun-belt for a coruscating denouement.

Joining Mendonca Filho on the director credit is Juliano Dornelles whose magical production design is set in the lush badlands where this darkly comic Western plays out, throbbing with sexual tension and an eclectic electronic soundscape.

Screen diva Sonia Braga is back from Aquarius this time playing a fearsome a maven and village doctor. Udo Keir also fetches up as Michael leading a group of American gringos out here to massacre local Latinos, in a modern metaphor for Brazil’s colonial past. Surrounded by prickly cacti and sun-baked hills, Bacurau is an enigmatic backwater with no wifi: it isn’t even on the map (the word appropriately means Nightjar). The much-mocked mayoral candidate Tony Jr. (Thardelly Lima) arrives in town attempting to garner support with a truck full of out of date food and medical supplies. But it emerges he is secretly in cahoots with Michael and his henchman and women who have come to the area with nefarious intentions, seriously misjudging the mood of the locals who by this time have had enough.  MT