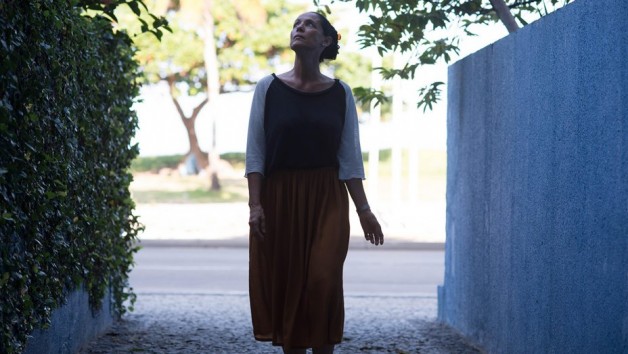 Brazilian writer and director Kleber Mendonca Filho rose to fame with his debut Neighbouring Sounds. His second feature is a feisty character study that again takes place in a Recife apartment building and stars the famous Brazilian actress Sonia Braga.

Clara is an elegant and single-minded woman (Braga) and the only resident left in an upmarket seaside apartment in the coastal town in North Eastern Brazil. In flashback we see her surrounded by an extended family celebrating her recovery from breast cancer and madly in love with her husband, who has long since died.  The developers want her out that they can refurbish the block and offer an attractive price. But Clare has no intention of leaving.

THE GIRL FOR RECIFE feels like a classic throw-back to boom times of the ’70s and there are faint echoes of Sebastian Lelio’s Santiago-set Gloria to this light-footed family drama. Intimate in scale and languorous in pacing, the story is driven forward by the verve and charisma of Braga’s prima donna performance – in the best possible way. Clara is a retired journalist and still firing on all cylinders when she comes up against a young and hungry developer, Diego (Humberto Carrao), who has plans to make some money out of the building, offering her well in excess of the market price but Clara is a lady not for moving as her home means everything to her with its nostalgic links to the past. She has clearly not lost her mojo where men are concerned and this is shown in rather awkward scenes where she seduces a much younger man and also manages to meet someone of her own age in a nightclub.

Once can’t help feeling the director is slightly in awe of Braga’s Clara (and Braga herself) as she hold centre stage in every scene sometimes misjudging the extent of her popularity and considerable craftiness. Meanwhile, she continues to fight the last stand against the developers with the support of her longterm cleaning woman in scenes that not only give Diego a run for his money but also seemingly the Brazilian government. AQUARIUS is a watchable and more gently amusing than Filho’s ambitious Sounds, but nevertheless serious in its message, although overlong in its running time. MT