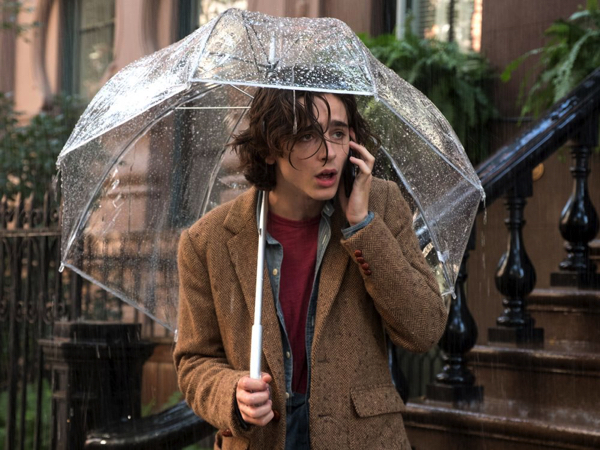 Woody Allen films are like proverbial buses: if you miss one another is sure to come along soon after, but here’s one you won’t want to miss with its bittersweet riff on the mystery of love and attraction.

A Rainy Day In New York is a typical Woody Allen comedy that follows two young lovers on the verge of graduation. Elle Fanning (Ashleigh) and Timothee Chalamet (Gatsby) provide fabulous entertainment as a couple of loved up Ivy Leaguers whose weekend trip to Manhattan goes pear-shaped. If you’re a Woody Allen you won’t be disappointed – this is a reliable, but not outstanding, largely to casting flaws.  But there’s so much energy, and Chalamet and Fanning exude charm in spades: she the excitable ingenue, he the subversive and surprisingly deep-thinking rich boy. The film has proved a global success on the  since its digital release.

Situational comedy wise the storyline keeps on rolling as it gathers momentum, at times feeling rather like Max Ophuls’ La Ronde, and the farce element is strong in satirising American privilege and celebrity culture along with the nouveau riche. Veteran DoP Vittorio Storaro (Wonder Wheel) assures another good-looking watch, whether it’s sunny or raining.

The plot is simple: budding journo’ Ashleigh has been granted a celebrity interview with world weary film director Rolland Pollard (Liev Schreiber). In her excitement to secure an unexpected scoop with the troubled auteur she misses a romantic lunch planned by Gatsby, and then finds herself entrancing both the film’s writer (Law) and the main star Francesco Vega (Diego Luna). Leaving a swanky nightclub on Vega’s arm, she is captured by the celebrity news channels who announce her as his new lover, as Gatsby watches on horrified, and annoyed. This clever indictment of fake news also gives Woody a chance to hit back at unfounded rumours surrounding his own love life, in the light of the #metoo narrative. Meanwhile lovelorn Gatsby runs into the hard-edged sister of a girl he once dated (Selena Gomez as Shannon) who invites him to be her love interest in a short film shoot involving a kiss. But the course to true love never runs smoothly and Gatsby has his overbearing mother (Cherry Jones) to contend with, and mothers are often the most difficult women to satisfy in a man’s life.

Chalamet and Fanning’s star turns aside, there are vignettes from an unrecognisable Jude Law as a screenwriter Ted, and Rebecca Hall as his ex. Cherry Jones is captivating as Gatsby’s mother who sheds a light on his character’s subversiveness. Woody subverts expectations in a romcom where the morally questionable characters are the women rather than the men. There is a cheating wife, the morally questionable young woman, and the savvy adventuress – the only sleazy ball  is Vega’s Latin lover, the other males are rather tortured souls such as Gatsby friend Alvin played by an insignificant Ben Warheit. Selena Gomez is one-dimensional as the ‘New York bitch’, her onscreen chemistry with Gatsby so unconvincing it actually ruins the film’s denouement.

Woody Allen’s is master storyteller who enjoys spinning a romantic yarn and sticking to his own tried and trusted formula. He’ll be remembered for his endearing comedies and for being one of the few New Yorker directors who actually moved from Brooklyn to Manhattan – rather than the other way round. MT